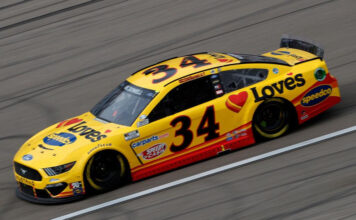 The NASCAR Cup Series began their west coast trip this past weekend at the mile-and-a-half Las Vegas Motor Speedway.

Going into Friday night’s race, Gilliland was looking for his first win at the Las Vegas Motor Speedway. His previous best was a fifth in the NASCAR Camping World Truck Series at the track, but his experience made him feel confident of winning.

Taking the green in sixth, Gilliland used all 134 laps to get his best result in the flashy Speedco Ford F-150. The team had to battle a tight truck throughout Stage One and Gilliland fell back to 19th. The Chris Lawson-led team, however, had big plans to get Gilliland back up front. Adjustments were made and Gilliland passed up to 14th after a quick Stage Two.

The run to the checkered, Gilliland and the No. 38 Speedco team showed their Vegas best. The team used three cautions to open the final stage to continue to make the truck faster and to also gain track position. The strategy put Gilliland second on a Lap 95 restart. Gilliland held strong, even on older tires. Although he couldn’t grab the lead, Gilliland kept pace with the leaders.

Three more cautions filled the final 34 laps of the race, but Gilliland used his experience and skill to finish 13th at the end.

The finish moved Gilliland to eighth in the championship standings. He’s 21 points out of fifth as he leads Ford Performance in the truck series.

TODD GILLILAND. No. 38 SPEEDO FORD F-150. FINISHED 13.
“We really did use all the race to get better, but we did. We had to use our set of tires, but it’s all part of the strategy to get back to the front. We just didn’t have the speed to race for the win. Then, we just had more tire wear than some others. I know that it was a good points night, but I also know that we can win these races, too. We’re going to be ready to go at Atlanta in a few weeks. We’re on the cusp of being really good.”

Starting fifth, McDowell was 12th during the Competition Caution on Lap 25. The Love’s Travel Stops Ford Mustang was fast out of the box, but need slight adjustments to loosen the car. At the end of the first Stage, McDowell was 21st after they had pit under a previous caution to continue to make the car better.

McDowell showed a lot of strength in the second Stage. He continued to climb through the field and the strategy was to run long before having to pit for fuel. With no cautions, it allowed the strategy to play out. McDowell took the advantage all the way to lead nine laps with his teammate in tow. McDowell finally had to relinquish the lead for fuel and tires. He finished the Stage 24th.

The final Stage, McDowell was again fast. A caution early in the Stage allowed the team to pit for tires and maintain with the leaders. McDowell just had a steady climb the remainder of the race with good execution on pit road and moves on the track. He moved into the Top-20 and really had a Top-15 Ford Mustang. McDowell raced hard with the cars around him and finished 17, just missing the Top-15 mark.

McDowell and the team are third in the NASCAR Playoff standings.

MICHAEL MCDOWELL. NO. 34 LOVE’S TRAVEL STOPS FORD MUSTANG. FINISHED 17
“Not the day we were hoping for in the Love’s Travel Stop Ford Mustang. We just got behind a little bit with some of the adjustments and just needed a little bit more speed. The car drove pretty well. We could stay wide-open for quite a long time, but just needed a little bit more speed. That was a fight all day. We finished 17th, not terrible, but we were hoping for more. I’m really proud of everybody and keep the good finishes rolling here and head to Phoenix, my home track. We’ll have some fun with the family and looking forward to being in my hometown.”

Alfredo led his first lap in the NASCAR Cup Series on Sunday at the Las Vegas Motor Speedway. A few strategy plays put Alfredo and the No. 38 Speedy Cash Ford Mustang team either leading or near the front throughout Sunday’s race. It was another great learning day and Alfredo has completed all but one lap in his last three races.

Alfredo started the race 27th and during a Lap 25 Competition Caution was in the same spot. Each week the team uses the opening laps to allow Alfredo to learn the track in his Cup car.

Alfredo was happy with his Speedy Cash Ford Mustang and moved to 20th by a Lap 46 Caution. Alfredo finished the first Stage in the 24th spot and had his best Stage of his young Cup career.

The second Stage, Alfredo and the No. 38 team elected not to split the stage in half, but instead pit at the end of their fuel window. This allowed for McDowell to lead and Alfredo to take over that spot when the 34 came to pit road. Alfredo made his first lap as the leader before pitting for fuel and tires. He showed good speed and had no problem leading the race.

After the stop, Alfredo was mired back a lap down. But, as the Stage ended, he was back on the Lead Lap. The Seth Barbour-led team used strategy again to put Alfredo up front in the final stage. On a late-race restart, Alfredo started near the front with 80 to go. But, the rookie wasn’t given any break and had to wait until the field went single-file to race for his spots back. He did just that. Alfredo made the climb back to 24th at the end.

It’s the second 24th-place finish and moved Alfredo up two spots to 27th points He’s only 12 points out of the Rookie of the Year spot.

ANTHONY ALFREDO. NO. 38 SPEEDY CASH FORD MUSTANG. FINISHED 24
“It was a solid day for our Speedy Cash team. I was really happy with the speed. The FRM guys did a nice job of preparing the car. We stayed out on some older tires near the end to restart up front. I just got split and lost any momentum. There is nothing you can do. We were better than 24th today, but it’s a solid day with more experience. I’m disappointed about that restart, but we can’t complain. We did a lot of good things today, too.”