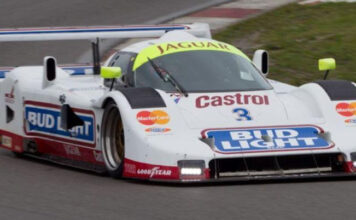 Exactly 30 years after a dominant win at Road Atlanta in the prime of the IMSA Camel GT era, Ross Motorsports will have a pair of the mighty Jaguar Grand Touring Prototype (GTP) machines back at the fast 2.54-mile road course North of Atlanta for the 43rd HSR Mitty.

Driven by Davy Jones, the V-6 twin-turbo XJR-16 made an outstanding series debut at Road Atlanta in the IMSA Camel GT race in late April of 1991, winning the pole and securing a dominant race win. Only Chip Robinson in a Nissan NPT-91 finished on the same lap as the winning Tom Walkinshaw Racing (TWR) Jaguar.

Raul Boesel, who finished third behind Jones and Robinson at Road Atlanta in a Jaguar XJR-10, was upgraded to his own XJR-16 a month later at Lime Rock Park. That is the No. 3 Jaguar Ross Motorsports and team owner/driver Malcolm Ross will race at The Mitty.

Ross is also bringing the 1991 Road Atlanta winner to The Mitty to serve as a backup and possible parts car if needed.

“This will be my first weekend in them,” said Ross, who acquired the pair of Jaguars from fellow owner/competitor Richard Eyre in England a little less than a year ago. “The 1991 Road Atlanta winner is chassis No. 191 and went on to win three more races. The XJR-16 we will be racing is chassis No. 291 that was driven by both Boesel and Martin Brundle in 1991.”

“Our Lotus has a ton of European racing history,” Ross said. “It ran with a number of different configurations and engines at various times and at one point was called the ‘Saturn’ when it ran as a closed-cockpit car in England in the late 1960s. It later won a Dutch championship as a modernized sports racer in the early 1970s before it was brought back to its original splendor. I bought it from a fellow on the West Coast named Don Stark and have been racing it for the past three years or so. It is probably my favorite overall race car we have, but then again I haven’t raced the XJR-16s yet!”

Competitor entries are still open and spectator tickets are on sale for the 43rd HSR Mitty. A variety of ticket options, from tent camping and daily admission on up to RV Parking and weekend tickets, are available at www.HSRTickets.com.

Online ticket sales, discounted from at-event prices, continue through April 19. All current online orders will be held at HSR Will Call in the Driver/Crew Registration Office at Michelin Raceway Road Atlanta for pick up starting Thursday, April 22.

Competitor Run Groups are available for everything from all types of sports car from the last 60 years to Stock Cars to open-wheel Formula and Indy cars. Entry forms are available at www.HSRRace.com.

More information, including the event schedule, can be found on the official 43rd HSR Mitty event page at www.HSRRace.com.
About HSR: Historic Sportscar Racing (HSR) was formed in the mid-1970s with an event at Road Atlanta. There was one goal then and it remains true today: to celebrate the race cars from the past. As a “time machine” of sights and sounds, HSR provides a venue for competitors and spectators alike to share in the wonderful history and excitement created by the cars that competed at race tracks around the world. HSR currently sanctions eight vintage and historic racing events at some of the world’s most renowned race tracks, including Road Atlanta, Sebring International Raceway, Daytona International Speedway and more. The complete schedule and full event information can be found on HSR’s website at www.HSRRace.com. Look for the HSR Channel on YouTube and follow HSR on Facebook at www.Facebook.com/HSRrace/ and on Twitter and Instagram at @HSR_race. A dedicated website for the Classic 24 Hour at Daytona presented by IMSA is available at www.Classic24hour.com.