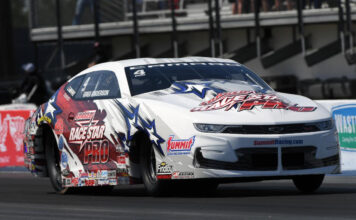 He’s always looking forward to his next win because he knows how difficult it is to clutch a Wally in the ultra-competitive category dominated by Chevrolet Camaros. Anderson will acknowledge, however, that his victory in the NHRA Camping World Drag Racing Series season opener last month in Florida was particularly significant.

It happened to come on his 60th birthday, ended an 18-month victory drought and moved him within two wins of tying his mentor, Warren Johnson, for the all-time Pro Stock leader with 97 wins.

“I definitely want to do that; I can’t say it’s not a goal,” said Anderson, who will seek to add to the total in the Denso Spark Plugs NHRA Four-Wide Nationals this weekend at The Strip at Las Vegas Motor Speedway. “That isn’t the reason I race, though. I race because this is what I love to do, and I love to win. Whatever that number ends up as, 95 or 105 or whatever it’s going to be, I’m going to be happy. I’m just going to try to get as many as I can.”

The COVID-19 pandemic caused four-wide races in Las Vegas and Charlotte, North Carolina, to be canceled in 2020. No Pro Stock driver entered this weekend has won in the four-wide format at Las Vegas.

Anderson, driver of the Denso Spark Plugs Camaro SS, is an eight-time winner at the The Strip.

“(The four-wide format) takes some getting used to,” said Anderson, who advanced to the final quad in 2019. “There’s a lot going on. I don’t know what it looks like for the spectators, but inside the car it’s a mess.”

Three-time Funny Car champion Robert Hight, driver of the Auto Club of Southern California Camaro SS, also had a strong start to the season with a runner-up finish at Gainesville. He’s a five-time winner at The Strip.

“We had a good start to the season at the Gatornationals. It was good to be back in the seat, be with the team and Jimmy Prock and Chris Cunningham. We had some gremlins, but we had some luck on our side too,” said Hight, who is a three-time winner in the quad format at Charlotte. “It’s a good weekend when you get to the final, but we beat ourselves so it’s time to do some polishing and get this Auto Club Chevy running the way we know how.”

Funny Car teammate John Force, PEAK/BlueDEF PLATINUM Camaro SS, has won eight times at the track. Top Fuel sensation Brittany Force, Flav-R-Pac Chevrolet dragster, holds both ends of the track records and will be looking for her 11th career victory. She won at the racetrack in the fall of 2019.
FS1 will telecast eliminations at 8 p.m. ET April 18.

BRITTANY FORCE, JOHN FORCE RACING, FLAV-R-PAC CHEVROLET DRAGSTER (holds both ends of track Top Fuel records — elapsed time of 3.680 seconds and 338.17 mph; won at track in 2019): “Vegas was our last win together in 2019. Vegas is one of my favorite tracks on the circuit and winning at your favorite track is something that can’t be beat. I’m excited to head to Vegas and start qualifying this Flav-R-Pac dragster. Our focus will be Saturday’s qualifying, especially that Q2 run setting us up for race day. We’re looking for more wins this season and ending the season with a championship.”

JOHN FORCE, JOHN FORCE RACING, PEAK/BLUEDEF PLATINUM CHEVROLET CAMARO SS (six-time winner at track; won the first four-wide event in 2010 at Charlotte): “I always look forward to racing at The Strip. Bruton Smith always puts on a good show. It’s already sold out. The fans are going to love it. It’s four-wide, it’s 40,000 horsepower. This BlueDEF PLATINUM team is excited so we’ll see how it goes, hopefully go some rounds and come out with a win.”

ROBERT HIGHT, JOHN FORCE RACING, AUTO CLUB OF SOUTHERN CALIFORNIA CHEVROLET CAMARO SS (runner-up in season opener; five-time winner at track): “Racing in Las Vegas is always a good time. I’ve had some success there but I’m looking to add a Four-Wide Nationals victory to my list. There’s a lot more going on when it’s four-wide but as long as you stay focused on what you’re doing and don’t worry about who’s next to you, it’s just like any other race. Whoever is in those other lanes, I’m not treating it any differently. The fans are the ones who really benefit from racing four-wide. Over 40,000 horsepower, the ground really shakes.”

ERICA ENDERS, ELITE MOTORSPORTS, MELLING PERFORMANCE/ELITE MOTORSPORTS CHEVROLET CAMARO SS (reigning and four-time class champion; four-time winner at track; holds track Pro Stock speed record of 214.69 mph; will be making 300th Pro Stock start and could surpass 350 career round wins): “I’m excited to go back to Vegas. We’ve obviously had a lot of success there. We were able to win the event there that closed the 2020 season and our fourth world championship in October. Four-wide is definitely interesting. It adds some challenging aspects. We’ll go there with a clear head and hopefully our Lady Luck that always graces us in Vegas will continue to do so.”

GREG ANDERSON, KB RACING, DENSO SPARK PLUGS CHEVROLET CAMARO SS (winner in season opener; eight-time winner at track): “We went home after Gainesville and worked on our engines to try to make something better. We love our shop time. (The four-wide format) takes some getting used to. There’s a lot going on. Inside the car it’s a mess.”

CHRIS MCGAHA, HARLOW SAMMONS RACING, HARLOW SAMMONS OF ODESSA CHEVROLET CAMARO SS (competing in 170th Pro Stock race): “I am definitely a fan of the four-wide. I think it’s a cool race given the fact that it is different than all of the others. It gives us something different to look forward to. Best part is, come race day, the slightest mistake takes you out of the race, so the pressure to be good mixed with some Vegas luck is critical. We used Gainesville as our test session in order to get all of the off-season dust out of my Chevy Camaro. We tested again this week in Tulsa to confirm what we learned in Gainesville, so we expect to show out in Vegas.”

MASON MCGAHA, HARLOW SAMMONS RACING, HARLOW SAMMONS OF ODESSA CHEVROLET CAMARO SS (competing in 10th Pro Stock race; semifinalist at season opener): ““We’re coming off some good momentum in Gainesville by making it to the semis. Heading into the weekend, we were able to test, giving us more data on the track and me more seat time. I guess you can say that after making five or so laps before the national event really helped my confidence. The pressure of competition didn’t bother me because I felt confident in my Chevy Camaro as well as my driving. This weekend is the first time I’ll be driving in a four-wide event. I have watched my dad (Chris McGaha) over the years talk about the differences between this event and a normal national event and it will be important that I do my own thing and not worry about what is going on in the other three lanes. I am looking forward to this new experience.”

KYLE KORETSKY, KB RACING, LUCAS OIL CHEVROLET CAMARO SS (runner-up at track in 2020 season finale; competing in 10th Pro Stock race and first time in four-wide event): “It will be a learning curve. You just have to go there and figure it out, with a clear mind. I watched some video, and I just have to hit my shift points. I have all the confidence in the world in my Lucas Oil Chevy Camaro.”

TROY COUGHLIN JR., ELITE MOTORSPORTS, JEGS.COM/ELITE MOTORSPORTS CHEVROLET CAMARO SS (runner-up in season opener; won first national event 12 years ago in Super Comp at Las Vegas): “I certainly remember that win in 2009. I was pretty much in shock and could barely talk when I got interviewed at the top end. We are tuned-up and ready to roll. Luck was on our side in Gainesville, and we gained a lot of momentum by starting so well. There is no limit to what we can accomplish and there’s plenty of goals to set our sights on this weekend in Las Vegas.”