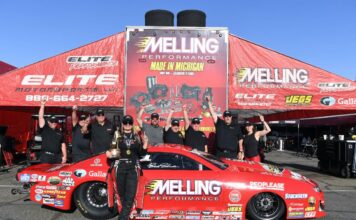 Enders’ Melling Performance/Elite Motorsports Chevrolet Camaro SS experienced tire shake on her two previous runs and was on the wrong side of the qualifying bubble. A steady, conservative pass in the final session at The Strip at Las Vegas Motor Speedway put her 13th in the 16-car field for the four-wide format.

She knew from experience that anything can happen on race day. And it did in an exceptionally positive way.

Enders, competing in her 300th Pro Stock race, picked up her 30th career Wally in the category by coming out on top in the final quad with a pass of 6.656 seconds at 205.88 mph. Aaron Stanfield was runner-up, Deric Kramer was third and Mason McGaha was fourth in their Camaros.

“I really want to give a big thank you to my guys. It is frustrating to go out there and shake your butt off both rounds (of qualifying). I came back and asked if I still had all my teeth,” said Enders, who clinched her fourth Pro Stock championship in November 2020 with a victory at The Strip. “They got down to business today and that’s all that matters. I’m so proud of my team and I love Las Vegas.

It was Enders’ fifth victory at The Strip and first in the four-wide format at the racetrack.
The COVID-19 pandemic caused four-wide races in Las Vegas and Concord, North Carolina, to be canceled in 2020. The second four-wide event of the season is scheduled for May 14-16 at zMAX Dragway in Concord.

Greg Anderson, the No. 1 qualifier for the second event in a row, registered the low elapsed time of the event of 6.632 seconds in the first round in the Denso Chevrolet Camaro SS for hometown KB Racing. He placed third in the second round – losing out to Enders on holeshot — and did not transfer to the final.John Force Racing drivers qualified No. 1 in Top Fuel (Brittany Force) and 1-2 in Funny Car (Robert Hight and John Force), but none were able to advance to the final quad.

Brittany Force, the No. 1 Top Fuel qualifier for the 21st time in her career, posted the low elapsed time of the event at 3.722 seconds in the Fav-R-Pac Chevrolet dragster in winning her first-round matchup. Force, who won at The Strip in the fall of 2019 and holds the track Top Fuel records, placed third in the second round.

Hight, runner-up in the season opener in Florida in the Auto Club of Southern California Chevrolet Camaro SS, and John Force in the PEAK/BlueDEF PLATINUM Camaro SS saw the same result in the second round of Funny Car eliminations. Hight, the top qualifier for the 69th time, is second to Force (160) on the all-time Funny Car list.

In a matchup of new and classic Chevrolet Camaros, Conner Statler drove a ’69 Camaro to victory over four-time Lucas Oil Drag Racing Series champion Greg Stanfield’s COPO Camaro in the final of Stock Eliminator as Stanfield fouled when he tripped the red light.
Chevrolet Top Fuel, Funny Car and Pro Stock drivers will all be in action April 30-May 2 at Atlanta Dragway for the Lucas Oil NHRA Southern Nationals.

CHEVROLET FROM THE COCKPIT
TOP FUEL:

“Overall, a good weekend for this Flav-R-Pac team. We qualified No. 1 and picked up point there. We ran consistent all weekend and unfortunately second round we got taken out. That’s four-wide racing for you. You have to keep your focus and I lost it for a short second and that was enough to end our day. We’re going home but we go to Atlanta next.

“It was a tough day for the Auto Club team. We looked really good all through qualifying and then had a problem in that first round but I’m proud of this team. All the guys worked really hard to get this car ready for the second round. Jimmy Prock and Chris Cunningham had this thing dialed in so I’m not worried and I’m looking forward to seeing what we can do. We’ll go out and do some testing tomorrow and move on to the next one.”

“We did our job, we qualified good. We went some rounds, Robert (Hight) with Auto Club, myself with PEAK and BlueDEF PLATINUM and Brittany (Force) with Flav-R-Pac and Monster Energy. We didn’t get the win, almost got to the final but we had some breakage and that’s why you need sponsors. All my partners are really standing by me, Chevy, Cornwell Tools stepping up their sponsorship, Baldwin Filters and ParkerStore, you know and that what’s really important.”

“It was a great weekend until that run. We definitely made a mistake on that run. We underestimated the racetrack and paid the price for it by losing on a dead heat with Erica (Enders). You have to execute every single run to win these days. Unfortunately, in drag racing it’s sudden death. You don’t get a second chance. A lot of positives; I feel great about the race car. We made one small mistake and it bit us. The whole team had great cars all weekend and great chances to win.”

“Being my first time in a four-wide I was pretty happy. Still real hard on myself because I wasn’t hitting the Tree like I should have been. Consistent, but consistently late. I’m still getting a feel for the car and the pace of the new car. We had a great qualifying, which just shows the KB guys have some real power.”

“Unfortunately, I took myself out of the race during the final with my red light. It was my race to lose. I was on the Tree all day and was feeling very confident. With every pass I am becoming more confident as a driver. It’s a routine and I think I’ve found it. I am learning the ins and out of the rest of the car, but as of right now, it’s my job to drive it and drive it well.”