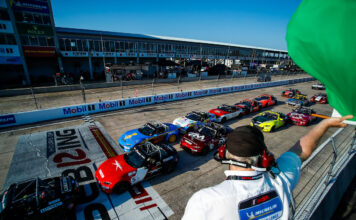 April 19, 2021 – The Idemitsu Mazda MX-5 Cup presented by BFGoodrich® Tires is making waves in the motorsports world with its incredibly close racing, and this week the spectacle arrives at the Grand Prix of St. Petersburg. The concrete walls and compact schedule will test each team’s performance under pressure.

It wasn’t so long ago that the Idemitsu Mazda MX-5 Cup was racing at St. Petersburg, as the series raced to a championship-deciding close on the Florida circuit just last October.

The Championship was decided by just four points in favor of Michael Carter (No. 08 Carter Racing Enterprises), who won the first race of the weekend and finished fourth in the second race to lock in the title and the $250,000 prize on offer from Mazda.

The reigning champion has already won this year in Round Two at Daytona International Speedway, but he comes into the St. Petersburg event trailing Gresham Wagner (No. 5 Spark Performance) by 150 points.

Wagner is the only repeat winner of the year so far and has a score to settle with the streets of St. Pete. Last year, his engine expired on the formation lap of the first race and thus prevented him from taking part in the second. Though he qualified on pole for both races, he never turned a race lap.

“I don’t think anybody is owed anything in racing, but I was definitely excited when St. Pete returned to the schedule,” Wagner said. “I loved the track and was really looking forward to the races last year, so I’m looking forward to getting back on track and going after the wins I feel like I was headed toward last year.”

The winner of Sebring’s epic Round Three finish, Selin Rollan (No. 87 Hixon Motor Sports), loves street courses, but loves the St. Petersburg street course in particular because he frequently flies into the Albert Whitted airport. He is currently third in the point standings.

“It’s a smaller airport, so it’s only prop planes and no jets,” Rollan said. “It’s on the water and there’s a nice restaurant in the airport terminal that has a balcony to watch the landing and departing planes. Just the fact that we race there once a year makes it a special place for me!”

Even drivers who’ve never raced a street circuit before are eager to get on track in St. Petersburg.

“I am really excited for St. Pete because every single person I have talked to about racing street circuits says they are an absolute blast,” said Loni Unser, driver of the No. 92 Hixon Motor Sports car. “I also like how there is no margin for error. I can’t wait to hear the sound the track makes while we are driving as well.”

“Not only is the St. Petersburg street circuit tight, but so is the schedule,” Long said. “The teams will practice and qualify on Friday, then have both races on Saturday. There is truly no room for error in Race One, since one mistake in that race can erase any hopes of starting Race Two.”

Both of Saturday’s MX-5 Cup races will be streamed live on IMSA.com, IMSA Radio and NBC Sports Gold TrackPass. Race One is set for 8:35am ET and Race Two will start at 4:20pm ET. A recap of the race weekend will air Wednesday, May 5, at 3:00pm ET on NBCSN.