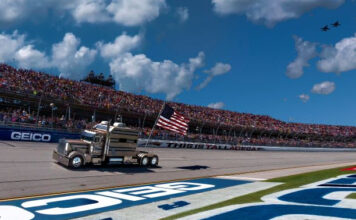 A Host of Numerous Alabama Kids Groups to Make Their ’Dega Debut with Performances Prior to Races; Also Will Serve as Color Guard

TALLADEGA, Ala. (April 21, 2021) – Few sights in sports have been more patriotic than that of John Ray’s gold, brown and chrome Big Rig truck, adorned with the red, white and blue whipping in the wind, making its way down the Talladega Superspeedway frontstretch prior to the start of races. The tradition since 2001 will continue this weekend at the mammoth 2.66-mile venue, which will include Sunday’s GEICO 500 NASCAR Cup Series race (1 p.m. CDT, FOX, MRN Radio and SiriusXM NASCAR Radio).

The patriotic theme will also be showcased in the GEICO 500 pre-race with an awesome flyover, consisting of four Air National Guard F-15C Air Superiority Fighter jets, from the 159th Fighter Wing “Bayou Militia” from New Orleans, LA. Both John Ray’s truck, today driven by his son Johnny, and the flyby, will be during the virtual instrumental National Anthem, which will again be performed by the Alabama-based 313th United States Army Band, which has given fans its incredible rendition at Talladega since 2014.

In addition to the above, there will be a host of pre-race dignitaries, as well as many kids groups from all over the state of Alabama, who will highlight pre-race festivities for the GEICO 500, along with Saturday’s Ag-Pro 300 and General Tire 200. They are listed below:

Limited admission options remain for the GEICO 500 and fans are encouraged to log onto www.talladegasuperspeedway.com or call 1-877-Go2-DEGA for details. Tickets are available for Saturday’s doubleheader, with kids 12 and younger admitted free (with a paying adult) to grandstands/towers.