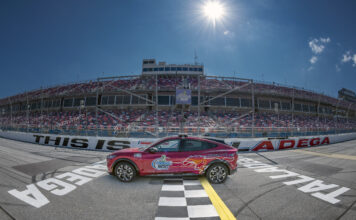 DEARBORN, Mich., April 22, 2021 – The Mustang Mach-E, Ford’s dynamic all-electric SUV, will be making its NASCAR debut this weekend when it serves as pace vehicle for Sunday’s NASCAR Cup Series race at Talladega Superspeedway.

This will mark the second time Ford has had an all-electric vehicle pace a NASCAR event. The first time came in 2012 when the manufacturer made NASCAR history by having its Focus electric perform all pace car duties for the Cup Series race at Richmond Raceway.

“We have always tried to use our presence in NASCAR to show off our dynamic and innovative vehicle lineup, and that continues this weekend with our all-electric Mustang Mach-E,” said Jeannee Kirkaldy, motorsports marketing manager, Ford Performance. “We feel this car not only stays true to Mustang’s great heritage but carries on its legacy in a modern way that we think fans and our loyal enthusiasts will embrace.”

The Mustang Mach-E has already made a strong impression in the marketplace, being named the North American Utility of the Year in January by an independent group of 50 print and broadcast automotive journalists from the United States and Canada as a first-time entrant.

“When I drove the Mustang Mach-E it was instant power and way better than I thought or expected,” said Matt DiBenedetto, driver of the No. 21 Motorcraft/Quick Lane Ford Mustang in the NASCAR Cup Series for Wood Brothers Racing. “It was something that I100 percent wanted to own for myself or my wife because when you hop in the car it’s nice and quiet, and the throttle response is so instant. It was a blast. It will make a great pace car.”

Team Penske’s Ryan Blaney has won two of the last three Cup Series events at Talladega and is the defending champion of this weekend’s 500-mile event. Overall, Ford has dominated in recent years at NASCAR’s biggest track, having won nine of the last 11 races, which includes a stretch of seven straight from 2015-18.

The Geico 500 is scheduled to start at 2 p.m. Eastern time and will be televised live on Fox.