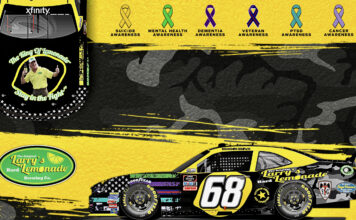 “I can’t wait to get back behind the wheel of our No. 68 Larry’s Hard Lemonade Chevrolet Camaro this weekend at Talladega Superspeedway. We’ll be running a unique paint scheme on Saturday and I’m really proud of the meaning behind it.

“On the hood of our car, people will see the words “Stay in the Fight,” directly below the face of Larry Wilson, founder of Larry’s Hard Lemonade. Larry has been an integral part of Larry’s Lemonade since their humble beginning and in early 2019, he was diagnosed with dementia at the same time that he received the news that he had won his 3-year battle with cancer; so the words “Stay in the Fight” are to represent his grit and determination over the battles that he has won, as well as towards the battles that he is currently facing. We also hope that those who are fighting illnesses of their own will read it and find encouragement.

“Down both sides of our car you’ll also see a variety of colored stripes, which represent six different awareness months: suicide, mental health, dementia, veterans, PTSD and cancer – all of which are meaningful to both Larry’s Hard Lemonade and myself.

“The last thing that can be noticed this weekend on both the hood and rear bumper of our car, is the phrase “The King of Lemonade™,” which is a new, and fitting slogan for Larry’s Hard Lemonade.

“With bringing such a unique paint scheme to Talladega, my goal is to have our No. 68 Larry’s Hard Lemonade Chevrolet up front and on camera as much as possible. I think that our 6th-place finish to start the season at Daytona really showed some of the bigger Chevy teams that we’re capable of running up front at superspeedways, so hopefully they’ll be a little more willing to work with us when it’s time to find a drafting partner.

“Our team is hungry for another strong performance and we’re ready to do whatever it takes to get a win and lock ourselves into the playoffs for the second year in a row. Hopefully this will be the weekend that we can make it happen.”
About Larry’s Hard Lemonade

One day at one of Larry’s famous backyard parties, he busted out a concoction that he dubbed “Larry’s Lemonade” and served it up to family and friends. Larry’s Lemonade was an instant hit and after receiving high marks from everyone, Larry knew he was onto something. Larry’s creation first found its way throughout Hampton Roads, VA to the Outer Banks of North Carolina, and now to you. Larry insists to this day that had it not been for the support of his inner circle of Lemons the world would never get to know The Original Larry’s Hard Lemonade®. To learn more, visit thelarryslemonade.com.