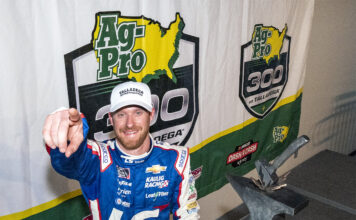 TALLADEGA, Ala. (April 24, 2021) – A thunderstorm pelted Talladega Superspeedway at just the right time for Jeb Burton.

After a seven-car wreck on the backstretch, Burton held the lead under caution when the rain intensified. After NASCAR brought the Xfinity Series cars to pit road, the clouds opened and made a first-time winner of the driver of the No. 10 Kaulig Racing Chevrolet.

“Unbelievable, man,” said Burton, son of 2002 Daytona 500 winner Ward Burton. “It’s been a tough road to get to this point. Just an unbelievable race team. Today we had Mother Nature on our side, but we had a fast car anyway. We ran up front all day…

“We’ve been building and building and building, and I feel like I’ve kind of been the weak link the last couple of races, and I need to clean some things up. Just the momentum—that’s what I needed… I want to win races. I told them (Kaulig Racing) that I wanted to come there and hang banners.”

The wreck on the backstretch on Lap 85 of a scheduled 113 destroyed the cars of Joe Gibbs Racing teammates Brandon Jones and Ty Dillon and ended the last green-flag run of the race. Michael Annett spun off the bumper of Joe Graf Jr.’s car, igniting a seven-car accident that brought out the fourth and final caution of the afternoon.

Dillon’s Toyota was knocked up the track into the Supra of Jones, as both cars sustained severe damage.

The first two 25-lap stages ran without incident. Justin Haley surged into the lead on the final lap of Stage 1 and beat Jeb Burton to the stripe to score the Playoff point.

The second stage went to Noah Gragson, who moved past Austin Cindric on Lap 50 to get the win.

“A hundred thousand dollars is a big deal for us,” Gragson said. “This is two times in a row. It’s pretty cool to be able to do that, but, man, I wanted to race for the win… A hundred thousand’s nice, but I race for wins. It is what it is. It’s ‘Dega, baby.”

Jeb Burton, Austin Cindric, AJ Allmendinger and Noah Gragson all qualify for the next round of the Dash 4 Cash at Darlington Raceway on May 9.

Cindric, the reigning series champion, leaves Talladega with a 59-point lead in the standings over second-place Daniel Hemric, who ran 12th on Saturday.

The mammoth 2.66-mile venue will see the final race of the weekend on Sunday during the GEICO 500 NASCAR Cup Series race (1 p.m. CDT, FOX, MRN Radio and SiriusXM NASCAR Radio). Limited admission options remain for the GEICO 500 and fans are encouraged to log onto www.talladegasuperspeedway.com or call 1-877-Go2-DEGA for details.