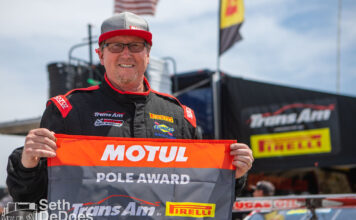 WILLOWS, CALIF. (15 MAY 2021)- A pair of rookies will share the front row in Sunday’s Trans Am Series presented by Pirelli West Coast Championship 100-mile race at Thunderhill Raceway Park.

It only took TA2® rookie Darrell Anderson four laps to break the class track record, setting a flyer of 1:48.380-seconds in the No. 45 Park Place Constructors Dodge Challenger to claim the Motul Pole Position.

Sunday will mark just his second race with the West Coast Championship. In his Trans Am debut, Anderson finished with solid standings at Sonoma, placing just off the podium in fourth. But, his momentum halted in Laguna after the Charlie Hayes Racing driver suffered an engine failure at WeatherTech Raceway Laguna Seca early in the weekend, sidelining Anderson for the rest of the event.

Today was Anderson’s redemption. As an SCCA San Francisco region regular, Anderson has turned more laps at Thunderhill than any other race track in the United States. Anderson continued to add to that lap count in testing and practice, setting the fastest overall time between the two morning practice sessions.

“It was a fantastic day,” said Anderson. “The Pirelli tires were amazing. Charlie Hayes Racing set up a car that was just phenomenal. The car goes where I want it to go and I was able to push it without any issues. I am very proud of the time and look forward to a good race.”

Troy Lindstrom is making his professional racing debut with Trans Am this weekend. Lindstorm will start Sunday’s 100-mile feature on the front row in second place in the No. 63 RaceCars4Rent Ford Mustang. Lindstorm finished 0.753-seconds behind Anderson with his personal best time of 1:49.133-seconds coming on Lap 3.

Lindstorm and Anderson are used to battling each other. The two are SCCA road racing drivers have went up against each other during several 25 Hours of Thunderhill races other over the years.

“It was really fun out there, we got to put on the Pirelli slicks, the first time I’ve got to run on brand new tires,” Lindstorm said. “The car has been fast since I turned my first laps yesterday. I am super happy with the organization, it’s great to be part of a professional organization. I hope to keep it together tomorrow for a podium finish.”

Michele Abbate dug deep on the final lap of the session, ripping off a 1:49.212-second flyer that catapulted her No. 30 Lucas Oil Products Chevrolet Camaro into a third-place start. The time nestled Abbate tightly between second-place Lindstorm and fourth-place Jeff Holden. Her lap was just 0.079-seconds off Lindstorm’s time and just .117-seconds ahead of Holden in the No. 11 Joe’sRacing/MidValleyTrans/M1 Chevrolet Camaro.

Abbate, the first female to earn a podium in TA2® history, will take the green on Sunday in the best position of her Trans Am career. The new accomplishment comes off the back of a disappointing weekend. The Las Vegas native suffered a major mechanical failure at Laguna Seca two weeks ago that ended her run before the mid-point of the race.

“Our Crew Chief Anthony put a lot of work into the car,” explained Abbate. “We did a lot of changes, more changes than we ever did at any race. Going into qualifying, I was confident that I was going to do well. I brought it in early because I nailed a pretty good lap and I was only one-hundredth of a second off from third, so together, Anthony and I decided we would go out one more lap. Fortunately, I was able to quite a bit faster, making up about eight tenths to get third. I am really proud to put in a good performance this weekend after a sad ending to our Laguna weekend.”

Second through sixth place were only separated by .666-seconds.

John Schweitzer finished on pole for the SGT class, 12th overall, in the No. 00 Superior Builders Inc Ford Fusion with a fast time of 1:59.825-seconds.

A top contender all weekend, Greg Tolson in the No. 33 GT Auto Lounge Chevrolet Camaro had the second fastest time of the day before his engine temperature shot up and the rookie TA2® driver decided to park it in his paddock. However, since he left pit lane without permission, his fastest time was revoked per the rules. He will be starting 13th overall, but will be a strong competitor to watch through the field.

In order to meet the county’s sound ordinance, all Trans Am sessions have to fall between 10:00 a.m. and 2:00 p.m. With such a tight window of opportunity to fix any issues that popped up during practice, four drivers did not qualify, including TA2® West Coast points leader Carl Rydquist, who was fastest overall in Practice 2.

“Unfortunately, we couldn’t participate in qualifying, the No. 47 car was slightly above the noise limit this weekend,” said Rydquist. “The car is very dialed in. I was very comfortable and ready to go for a new TA2® record here. The Nelson Motorsports crew is working now to make sure everything is robust for the race.”

The Trans Am Series presented by Pirelli drivers will take the green on Sunday at 12:45 p.m. Pacific for a 35 lap (or 75 minutes) race. Live timing and scoring will be available all weekend at www.gotransam.com/livetiming.