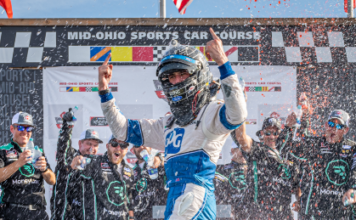 The Toledo, Ohio-based ARCA Menards Series returns for the first time to Mid-Ohio since 1965. Tonight’s feature also marks the 1,500th race all-time for the series as an 18-car field is set to battle in its home state. Corey Heim leads the points championship by a close 10-point margin over Ty Gibbs with Thad Moffitt sitting third.

For the eighth time on early Saturday afternoon, the rising stars of the NASCAR Xfinity Series compete at Mid-Ohio in the B&L Transport 170 as NASCAR’s only national series stop in Ohio in 2021. After winning the event in August 2019, Team Penske’s Austin Cindric will look for a repeat victory as the 2020 reigning series champion and current season points leader.

“Winning my first race at Watkins (Glen) then Mid-Ohio, and then qualifying on pole the next week at Bristol, it was definitely a fun time for me and the number 22 team,” said Cindric reflecting on his August 2019 accomplishments and his win at Mid-Ohio. “We’ve obviously been able to accomplish a lot since then, so looking back and for a lack of a better term, I’m a much more accomplished driver since the last time I showed up at Mid-Ohio. It’s a fun race track, and it’s somewhere that I’ll run my first lap, and I’ll have a smile on my face and remember why I enjoy coming here so much.”

Additional race weekend highlights include a doubleheader for the high-flying SPEED Energy Stadium SUPER Trucks, taking on the asphalt, jumps and air during its thrilling Mid-Ohio return with two races on Saturday. The Yokohama Drivers Cup USA makes its first visit to Mid-Ohio in this all Porsche racing series with races both days. Six races in total will take the green flag across the two-day event.

Mid-Ohio Sports Car Course offers an exceptional family value. Children 12 and under are admitted free to Mid-Ohio when accompanied by a ticketed adult. Free parking is available. General admission is $60 for the weekend. Tickets are $10 additional each when purchased at the gate. Tent and motorhome camping is available on site. To order tickets in advance, visit midohio.com or by calling 419-884-4000, Monday through Friday 8:30 a.m. to 5 p.m. ET.