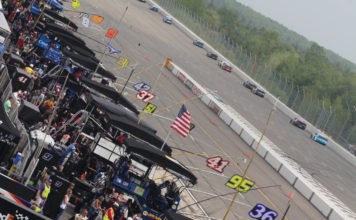 NASCAR and slot game enthusiasts will have loved the fact that a game was designed with motorsports in mind, as Bally Technologies decided to give the extremely popular stock car racing league their own place in the online slot game world.

Although there will be many who play Immortal Romance slot game and many other modern games, there is no denying that NASCAR: Hold Onto Your Seat! is a slot game that still provides players with the thrills and excitement that those games offer.

There are a total of five different NASCAR race legends available on the playing grid that help bring the theme to life, especially as these legendary individuals can help players race their way to the checkered flag and pick up jackpot wins. The five drivers include Clint Bowyer, Jimmie Johnson, Kevin Harvick, Dale Earnhardt, and Jeff Gordon.

The car icon and the number icon will be influenced by which driver is chosen, whilst the basic icons all include things that petrolheads would expect to see, such as speedometers, wrenches, tires, and checkered flags.

The game is played across a playing grid that consists of 5 reels and 3 rows, whilst bets can be placed from as low as $0.40 per spin and for a maximum of $3.20 per spin that is made.

Bonuses and the special features

There are a number of different special bonus rounds and features available in this NASCAR: Hold Onto Your Seat! slot game, with special symbols available being the way to trigger them.

There is just one wild symbol in this game, however, it can provide players with more opportunities to win as it can perform a substitution trick where possible.

The Bonus Wheel Spin free game will allow for wilds to do a lot more, though, as they can appear locked on the reels and in stacks.

The game also features a huge four scatter symbols, with each being connected to the four different bonus rounds that can be triggered. Just three are needed to trigger one of the following bonus games:

The Pit-Stop Bonus will see players be required to choose five of the 15 bolts available to reveal a cash prize, or various upgraded parts such as the engine, tires, fuel, and a wrench. Each of the items to be unlocked will increase the prize to be won.

The payer can get a set of reels for a free spins game with the U-Race Bonus, and a virtual race circuit with five NASCAR racing cars will also appear.

Players will receive five free spins and will also get to choose one of three directions for their chosen driver to head in. Players will then be able to get a win multiplier on the next spin; starting from 2x and going to 8x.

The Burnout Wheel bonus is a traditional free spins game that will allow players to try and obtain as many free spins that they can. Options on the wheel include:

Winning the jackpot in this NASCAR: Hold Onto Your Seat! slot game is what players should be looking to achieve, especially as it is a progressive jackpot that can potentially reward players rather lucratively.

All players will be able to try and win the six-figure prize regardless of the bet that they place, with the jackpot starting at $400,000 and being able to reach double that amount at certain moments.

To win the prize, lucky players will simply need to land all five of the NASCAR trophy icons on one line, although those who land three will win a smaller jackpot.