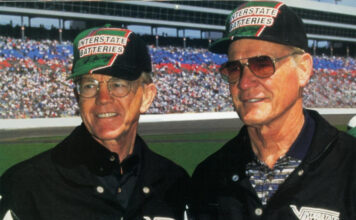 Gibbs and the elder Landry were the co-grand marshals for the speedway’s first NASCAR Cup Series race on April 6, 1997. The 2021 NASCAR All-Star Race will be held for the first time at the speedway, which is celebrating its 25th Season of Speed.

Norm Miller, Chairman of the Board of Interstate Batteries, the entitlement sponsor of that first NASCAR race at No Limits, Texas, will provide the invocation prior to the start of the $1 million-to-win All-Star Race. Miller waved the green flag to start the 1997 Interstate Batteries 500.

“I really appreciate everyone at Texas Motor Speedway for the opportunity to give the command to start the engines for this weekend’s All-Star Race with Tom Landry, Jr., said Gibbs, whose Joe Gibbs Racing (JGR) organization will field all four of its NASCAR Cup Series entries in the NASCAR All-Star Race. “I had so much respect for his father and it was a great honor to serve as grand marshal with him 25 years ago for the Interstate Batteries 500. What a great way to recognize that moment now, especially as we celebrate not only our 30th anniversary at JGR this season, but also our 30-year partnership with Norm (Miller) and everyone at Interstate Batteries.”

Landry, Jr. currently serves as President and a Director of Dallas-based Landry Investment Group, Inc., an organization involved in various investment activities and sports-related projects. He is a co-owner of an independent oil and gas exploration and production company with operations in Oklahoma, Louisiana, Arkansas, Illinois and the Texas Gulf Coast. He received a Bachelor of Arts Degree from Duke University and a Juris Doctorate Degree from the University of Texas School of Law.

“My father considered it a great opportunity to be part of the first NASCAR Cup Series race at Texas Motor Speedway back in 1997 so I’m honored to continue his legacy at the first NASCAR All-Star Race taking place during the speedway’s 25th Season of Speed,” said Landry. “The speedway has been a great community partner over the decades. It will be wonderful to see race fans filling the grandstands again enjoying outdoor activities together while watching some spectacular racing.”

Tom Landry, known for his ever-present fedora hat while on the sidelines, was the head coach of the Dallas Cowboys from its inaugural season in 1960 to 1988. He took the team to five Super Bowls, earning victories in 1971 (defeating the Miami Dolphins in Super Bowl VI) and 1977 (defeating the Denver Broncos in Super Bowl XII). He was inducted into the Pro Football Hall of Fame in 1990 and the Dallas Cowboys Ring of Honor in 1993.