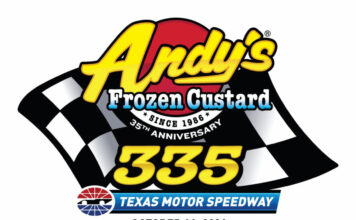 Springfield, MO – June 12, 2021 –Race fans, raise your spoons! In celebration of Andy’s Frozen Custard’s 35th anniversary and as part of a multi-year agreement with Texas Motor Speedway, Andy’s™, the award-winning frozen custard and treat shop, today announced the title sponsorship of the NASCAR Xfinity Series (NXS) race on October 16 at Texas Motor Speedway. The “Andy’s Frozen Custard 335,” is the first ever entitlement of a sanctioned NASCAR race for the 35-year-old company.

Andy’s will also be partnering with Kaulig Racing for the “Andy’s 335.” A. J. Allmendinger, with nine top-five finishes in the NASCAR Xfinity Series this year and a 2021 playoff driver, who just earned his second win of the 2021 NXS season and has already locked himself into the playoffs, will be driving the No. 16 Andy’s Frozen Custard Chevy in the race.

“This is such an exciting time for Andy’s, with this motorsport’s partnership launching in our 35th anniversary year,” Andy Kuntz, president of Andy’s Frozen Custard said. “Our family has a long history of being motorsports fans and has sponsored regional and developing drivers. We couldn’t think of a better way to celebrate our anniversary than to become part of the racing community in this way.”

The Andy’s Frozen Custard 335 will take place at 3 p.m. ET on Saturday, October 16, and will be broadcast live nationally on NBC.

About Andy’s Frozen Custard
Founded in 1986 in Osage Beach, MO by Andy’s parents John and Carol Kuntz, Andy’s Frozen Custard has been providing the freshest frozen custard in the business for 35 years, giving ice cream the “cold shoulder” by scooping, mixing and presenting handcrafted frozen custard treats with speed and a smile. Since the beginning, the family has had one dream: to share what makes them happiest with everyone else, and to warm hearts, one scoop of frozen custard at a time. With a focus on product quality, customer service and community involvement, Andy’s has grown into the nation’s largest frozen custard-only business, with more than 2,000 employees and 94 company-owned and franchised stores across 14 states proudly serving the World’s Finest Frozen Custard. Andy’s also offers the ‘Yum Squad Loyalty Club,’ designed to say “thank you” to loyal customers by earning points to redeem towards a free treat for every dollar spent. For more information or for details about franchising opportunities, visit www.eatandys.com.