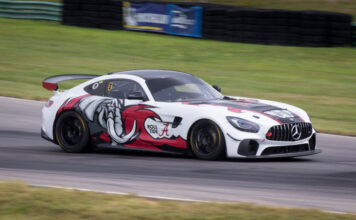 Capstone is set for both its IMSA and Watkins Glen International debuts fresh off the team’s first professional sports car racing victory earlier this month at VIRginia International Raceway (VIR) where Allen and Wilson co-drove to the win.

Ferrera partners Allen and Wilson in the Capstone driver lineup next weekend for the four-hour race at The Glen, which joins the season-opening four-hour at Daytona International Speedway as the two longest races on the Pilot Challenge event schedule.

The IMSA debut also brings Capstone’s growing University of Alabama College of Engineering Sports Car Racing Internship Program to the IMSA paddock for the first time. The establishment of Capstone continues an evolution for Allen and the UA Engineering internship program which has been an at-track technical curriculum the last couple of years.

Active in the sport since 2013, Allen is quick to see the connection between sports car racing and the educational programs offered in the UA College of Engineering.

“Sports car racing today is about so much more than just driving fast and flat out,” Allen said. “Along with driver ability, engineering is the most important aspect of success in today’s high-tech arena of sports car racing. We established the internship program a couple of years ago to open this world to UA Engineering students that might not be aware this incredible opportunity exists. We can’t wait to get to Watkins Glen next weekend to debut both our racing team and the internship program in IMSA.”

The Capstone Motorsports name was chosen to reflect the team’s close ties to UA. “The Capstone” is a nickname for The University of Alabama coined by former UA President G. H. Denny when he used the reference, meaning “the top stone or high point,” to describe the University as the “capstone of the public school system of the state” in 1913.

“I love Watkins Glen,” Allen said. “It’s my all-time favorite of all the tracks I’ve ever driven. I love endurance racing. The team aspect, pit strategy, it’s exhilarating to be a part of a team effort like that. It will be my second IMSA race. I did a race a few years ago and kind of got bitten by the bug. I’m glad that we’re headed back that way to get involved in IMSA.”

Allen’s one-off Pilot Challenge start was with Automatic Racing in 2018 at Road America co-driving with Ramin Abdolvahabi, but it is Wilson – Allen’s fulltime teammate the last few seasons – who brings the most IMSA Grand Sports (GS) class experience to The Glen next weekend.

Wilson has partnered primarily with Ferrera at Automatic in recent seasons in Pilot Challenge competition where the duo earned some success in the four hour races with a runner-up GS finish at Daytona in 2019.

“We are super excited to have our new Capstone Motorsports team stepping into the IMSA arena,” Wilson said. “Gary and I have run together in the Michelin Pilot Challenge series for the past few years, but I’m looking forward to now having John, Gary and I race together in the four-hour race at The Glen in our Mercedes-AMG GT4.

Ferrera has been a pitside guest of Allen’s at races but this is the first time they will co-drive together with Wilson.

“Gary is like Kris, just a good, fun guy to have around and on your team,” Allen said. “Always smiling, always happy. We pick our guys to fit in.”