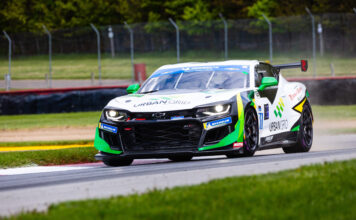 Frank DePew and Robin Liddell will drive the No. 71 Urban Grid Chevrolet Camaro GT4 at the New York track after posting a productive two-day test at the Glen recently. Rebel Rock scored a dramatic victory at Sebring earlier this year, and will look for another big result this Saturday.

“We tested at The Glen two weeks before the race,” Liddell explained. “We had a really good test and we re-familiarized ourselves to the track. There were quite a few IMSA teams there, so we were able to measure ourselves against some of the other teams. I think we’ve got a reasonably good package for the race.”

“I feel good about our test,” DePew said. “I was still learning the track when we raced there two years ago. Our test went really well, and I was able to begin to master the track a little bit more. Getting more laps in really helped me make a good jump through those two days.”

The team finished a competitive fifth in a challenging race in their last visit to the Finger Lakes circuit in 2019. DePew drove a solid opening stint in an event that included penalties, contact and a late rainstorm for Liddell and endurance driver Andrew Davis. That showing set the scene for the following weekend at Canadian Tire Motorsport Park, when Rebel Rock Racing scored its first of two 2019 victories.

DePew and Liddell will tackle the four-hour event as a duo this weekend, a similar strategy to the 2021 season opener at Daytona for the only other four-hour race on the schedule.

“I just hope it isn’t super hot,” DePew said. “I’ll be prepared to spend from 100 minutes to two hours in the car. I think we’re better prepared there than we were two years ago.”

“We’re going to run a similar strategy to what we ran at Daytona,” Liddell said. “Frank did a good job at the test. He did a really good job at The Glen two years ago, and he’s a much better driver now and is a lot more experienced. He’s also a lot quicker than he was then. He can certainly hold his own in the opening portion of the race. I think we’re in pretty good shape, and we’re looking forward to it.”

The upstate New York track is one that is a driver favorite, but the late June date can create some unique challenges for the team and drivers.

“It’s probably going to be hot and sticky,” Liddell added. “It’s going to be tough to spend lots of time in the car. But at the end of the day, I think two drivers is the best way to go. If we have a good, clean race, I think we can have a good result.”

Following the four-hour race, Rebel Rock plans to stay in place for the next event – the Sahlen’s 120, a two-hour sprint at Watkins Glen the following Friday (July 2). This replaces the cancelled event at Canadian Tire Motorsport Park.

“IMSA made it possible for us to stay in place in the paddock, so most of us will stay there,” Liddell said. “We can re-prep the car, depending on what’s required, and go and enjoy the local sights the area’s got to offer. It’s a nice part of the world, so we can have a nice couple of days break.”

Rebel Rock Racing is sixth in the GS point standings, 230 points behind the leaders with the revised IMSA point structure.