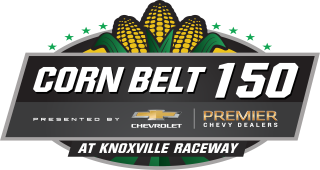 Catch the Action … The Corn Belt 150 Presented by Premier Chevy Dealers at the Knoxville Raceway will be broadcast live on FS1 on Friday, July 9, starting with NASCAR RaceDay: NCWTS Knoxville at 8:00 p.m. (ET). It will also broadcast live at 7:00 p.m. (ET) on the Motor Racing Network (MRN) and SiriusXM NASCAR Radio.

The tentative weekend schedule for the NASCAR Camping World Truck Series at the Knoxville Raceway:

In preparation for the Corn Belt 150 Presented by Premier Chevy Dealers, on Tuesday, July 6, Berry tested a Super Street
at Friendship Motor Speedway, located in Elkin, N.C. It was the first time Berry ran anything on a dirt track.

Starting Lineup: NASCAR has instituted a special format for qualifying at the Knoxville Raceway which includes qualifying races to decide the starting lineup. The lineup for the qualifying races is done by a random draw on Thursday, July 8. The random draw determines heat race designation and starting position for the heat race. The draw is in order of current NASCAR Camping World Truck Series owner points (21st-place).

Pit Stall Selections … Pit Stall 31, towards Turn 2 on the backstretch.

Atop the Pit Box: Chad Kendrick … Chad Kendrick, crew chief for the No. 25 Rackley Roofing Chevrolet Silverado, with
the NASCAR Camping World Truck Series will visit Knoxville Raceway this weekend for the first time. On dirt (Eldora
Speedway, and the Bristol Motor Speedway DIRT), Kendrick has one top-five finish and four top-10 finishes in the NASCAR
Camping World Truck Series in eight starts.

In the Rearview Mirror: Pocono Raceway … Josh Berry, driver of the No. 25 Rackley Roofing Chevrolet Silverado for Rackley W.A.R., finished in the 11th-place in the NASCAR Camping World Truck Series CRC Brakleen 150 at the Pocono Raceway on Saturday, June 26, in Long Pond, Pa. Berry started in the 20th-place in the 39-truck field, and at the end of Stage 1 on Lap 15 he was in the 20th place. By the end of Stage 2 on Lap 30, Berry was scored in the sixth-place. He was scored as high as the fourth-place at the “Tricky Triangle.”

QUOTE WORTHY
Josh Berry, driver of the No. 25 Rackley Roofing Chevrolet Silverado for Rackley W.A.R.
“I am really excited to head to the Knoxville Raceway this week, and get to experience dirt racing for the first time. I have never raced on dirt, at all, so it will be about learning quick, adapting, and staying out of trouble in the race. If I am able to do that, I know that we can take the No. 25 Rackley Roofing Chevrolet Silverado to the front.”