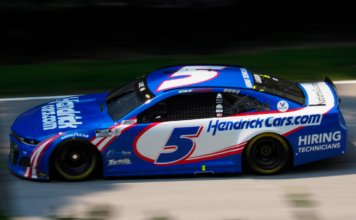 CONCORD, N.C. (July 14, 2021) – Hendrick Automotive Group, via its HendrickCars.com brand, will become the 35-race majority sponsor of Kyle Larson and the No. 5 Chevrolet Camaro ZL1 team in both the 2022 and 2023 NASCAR Cup Series seasons. In addition, Hendrick Motorsports has extended the driver’s contract for one year through 2023.

As part of the agreement, HendrickCars.com will also sponsor Larson in all non-NASCAR events in which he competes, including branding on the driver’s helmets, gloves and firesuits. The 28-year-old native of Elk Grove, California, is a prolific dirt racer who has won 56 times since January 2020 in a variety of cars and series outside of NASCAR. In addition to Larson, HendrickCars.com is the primary sponsor of four-time NHRA champion Greg Anderson.

“When we perform on the track on Sunday, we can feel the impact on Monday,” said Rick Hendrick, chairman and CEO of Hendrick Automotive Group and owner of Hendrick Motorsports. “With the chance to plan for the next two years, the program is only going to help Hendrick Automotive Group sell more cars, book more service appointments and ultimately do more business. It will also allow our company to recruit talented people and support our internal recognition and incentive programs. The more we followed the data, the easier the decision became. We are seeing clear results.”

Five of HendrickCars.com’s six highest-traffic days of the year have been attributed to its sponsorship of the No. 5 team, including four Cup Series race days when Larson led the most laps or won. In February, the reveal of the HendrickCars.com paint scheme drove the site’s highest one-day visitor count in more than 12 months. Since then, it has seen significant increases in overall traffic (up 27%), vehicle sales leads (up 18%), digital retail leads (up 37%) and trade evaluations (up 61%).

“More website traffic generates more sales leads, which ultimately help us sell more cars,” said Darryl Jackson, vice president of financial services for Hendrick Automotive Group. “Kyle’s performance on the track has delivered a measurable business return for us. The company is on pace for a record year in 2021, and we certainly see our motor sports programs contributing to that success. Racing is in our DNA, and tapping into the passionate fanbases of NASCAR, the NHRA and now Kyle’s grassroots program is both very effective and a perfect fit for who we are.”

HendrickCars.com, which will also be Larson’s primary sponsor in 10 of the 15 remaining Cup Series races of 2021, is the easiest way to shop thousands of new and pre-owned cars, trucks and SUVs. Customers can use the site to locate the nearest Hendrick Automotive Group dealership, schedule maintenance and learn about Hendrick Autoguard, the company’s industry-leading vehicle protection program. Visitors can also learn about career opportunities at Hendrick Automotive Group, which is currently in need of more than 300 service technicians.

“The chance to extend my contract with Hendrick Motorsports and have such an awesome sponsor in HendrickCars.com are things I don’t take for granted,” Larson said. “I feel like I’m driving for the best team and the best sponsors in the sport. To know that our on-track performance is having positive business influence off the track is very important because I want to return the incredible support they’ve given me. Everyone at Hendrick Automotive Group has made me feel like part of their team, and it’s exciting to be able to represent a company that loves racing like I do. I feel like we’re just scratching the surface of what’s possible.”

In his first season with Hendrick Motorsports, Larson leads the NASCAR Cup Series in wins (four) and is currently the projected No. 1 seed for the 2021 playoffs. After just 21 of 36 races, the driver has already set personal single-season records for laps led (1,441) and stage wins (12). He won the June 13 NASCAR All-Star Race and has finished first or second in nine points races this year. In addition, the driver launched the non-profit Kyle Larson Foundation in March while keeping a busy racing schedule at short tracks across the country with 10 non-NASCAR victories.

“It’s been a big year for Kyle,” Hendrick said. “His talent inside the race car has been on full display, and he’s doing amazing things through his foundation and with our partners. I’m proud of his hard work and look forward to having him on our team for many years to come.”

HendrickCars.com joins Valvoline, which has three primary sponsorship races with the No. 5 team, to fill out Larson’s full 38-event NASCAR Cup Series schedule in 2022. Valvoline is the Official Lubricants Partner of Hendrick Motorsports.

ABOUT HENDRICK MOTORSPORTS:
Founded by Rick Hendrick in 1984, Hendrick Motorsports is the winningest team in NASCAR Cup Series history. At the sport’s premier level, the organization holds the all-time records in every major statistical category, including championships (13), points-paying race victories (273) and laps led (more than 72,000). It has earned at least one race win in a record 37 different seasons, including an active streak of 36 in a row (1986-2021). The team fields four full-time Chevrolet Camaro ZL1 1LE entries in the NASCAR Cup Series with drivers Alex Bowman, William Byron, Chase Elliott and Kyle Larson. Headquartered on more than 100 acres in Concord, North Carolina, Hendrick Motorsports employs approximately 600 people. For more information, please visit HendrickMotorsports.com or interact on Twitter, Facebook and Instagram.