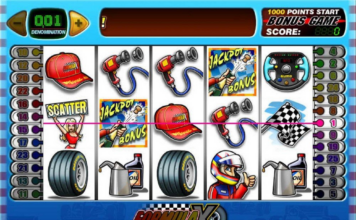 Back in the days of arcade machines and clubs offering all kinds of entertainment, racing games dominated and created a faithful fan base. With technological advancements, the most reputable casino sites came up with a great idea – why not combine them with slot car casino games and create an equally solid audience that will enjoy the blend of two worlds? At first glance, it was a mission impossible, but the series of fortunate events proved the decision was nothing less than right. Let’s get you through the list of top car-themed slot machines you can play for free or for real money.

One of the first and still a good slot car game, Formula X is an IGT release produced in Flash, so you’ll need a browser supporting the technology to fuel it up on your device. Anyways, the plot presumes you’re a Formula One pilot that first needs to settle his/her bets between 0.01 and 250 coins per spin and then turn on the vehicle.

The rest is as simple as possible – the reel set starts spinning to eventually bring a prize on 1 or all 25 paylines. The latter is needed for all who chase a progressive jackpot which also requires you to collect 1.000 bonus points accumulated throughout the course. There are 3 main prizes, including the Super and Grand one, so it’s only up to your stake to decide the exact amount of cash.

Even though demo mode is an option, only when playing the cars for cash is where you’ll truly feel the excitement. To start, players need to make a deposit using an accepted payment method, for example, one of the most convenient is to pay by phone.  By visiting LeafletCasino, you can find reviews of websites that accept pay by phone as a preferred method and offer favorable terms to their customers.

Sports fans into driving and racing that always feel speed whenever nearby are still fond of the Rally slots game produced by Leander. Setting the stage into one of the most exciting races ever, the slot car title follows a simple narrative with Wilds, Scatters, and Bonus rounds, so let’s get the wheels roaring.

First of all, players will find a lot of betting combinations to cater to both newbies and seasoned pilots. The rally slot car driver as your avatar is the highest-paying of all icons offering 500x the stake for 5 matchings.

Wilds are doing just what you expect from them – substituting for all other items but the Scatter. The latter is needed to trigger the extra theme and can bring cash prizes of 5x, 50x, or 150x the stake should 1, 2, or 3 respectively appear anywhere on the reels. During the feature slot game, your mission is to collect flags while passing through checkpoints and avoiding car damages. It is also possible to continue from where we left off, and this is a nice way to show how casino brands collaborate to build up a stronger fanbase.

Inspired by so many great driving-themed games, this one combines muscle cars, sports, and slots all wrapped in a package with captivating electronic music and slick design. Welcomed to the future, players will get a high-octane action title and eventually scoop the big win of 750.000 coins.

NetEnt decided to stick to the classic gameplay offering 5 reels, 3 rows, and 15 fixed paylines where you will find Multiplier Wilds substituting for all other icons. Moreover, they can boost any winning combination they’re part of.

Additionally, players can unlock 10 extra spins with 3 Scatters, while the top online experience starts after collecting Nitro symbols – you will unlock the next super speed car’s opponent, increasing the number of free spins at the same time. Another interesting option is a multiplier of 4x, 5x, or 6x applied to all winnings scored throughout this round.

Microgaming never stands still while the studio’s major rivals and other online casino game developers are trying to dominate the slot cars scene. Their answer to NetEnt’s hit revolves around the popular “Fast and Furious” series and comes with a lot of advanced features, including traditional options such as AutoPlay and Quick Spin.

There are 243 ways to make a winner out of slot car icons such as boosted versions of Chevy, Cadillac, and Volkswagen Beetle cars. Also, there is a set of lower-rated ones starring nitro and an engine. Racing fans will enjoy the Bonus Race spreading over five stages, during which your racer competes against others on the track.

Crossing the finish line first grants 5x the bet, while each new car racing event is a new chance for a bigger win. Thus, a series of successful events grants 15x, 35x, 75, or 175x your highest stake. The other side of the spectrum is filled with extra rounds, and you can spin up to 30 times at the casino’s expense, with all winners multiplied up to 5x.

Monster trucks are the second-best choice for fans of the top cars, so Playtech gave them satisfaction to become truckers at least while enjoying online slot games. Each spin in this 5-reeler can bring a maximum of 10.000 coins next to winners you can take in the bonus rounds.

Visually, this is one of those slots games that aren’t much and combines Red Truck Wilds with 2 more truck items serving as multipliers. Both the yellow and green trucks can boost the bankroll granting 5.000 or 1.000 coins, respectively. Other themed icons have a slightly lower rating but can produce up to 300 coins.

This is a progressive jackpot title where this feature literally erases all possible downsides related to graphics and sounds. After each spin, a combination of 5 numbers will be chosen randomly, and should all of them are of the same kind, lucky winners will take the entire pot.

Covering a multiverse of themes related to cars, there are a plethora of engaging titles you can find in reputable online casinos. Each gamer can find a slot car to be called my top when creating an account and start the online casinos’ adventure. Formulas, monster trucks, speeders, and other slot car machines are around the corner – some of them inspired by movies, others come with different features, but one thing is what they have in common: to entertain all who cherish slot car titles. As always, everything about these cars is up to you.