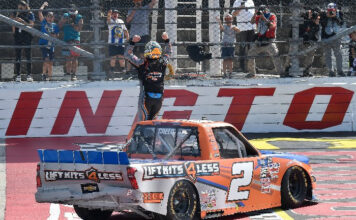 Back2Back: Sheldon Creed is the NASCAR Camping World Truck Series championship points leader after his win at Darlington Raceway. Creed looks to continue to build on his momentum and go for a clean sweep of the Round of 10 next time out at Bristol Motor Speedway.

Quote: “Gosh, what a tough race! We certainly earned that one, even though my truck wasn’t handling great early on, the crew kept working on it and we got better each time out. I drove super hard to stay in the clean air, that damage really hurt us early on. Pit crew was phenomenal all race long, best they have been all year. It feels so great to go back to back and open up the Playoffs with two wins!”

21in21: Zane Smith continues to find himself below the cutline entering the final race of the Round of 10 at Bristol Motor Speedway. Smith needs to gain five points on his nearest competition to advance to the Round of 8, a task that is very doable.

Quote: “More mistakes today. Jack failed on the second stop, then I made a big mistake trying to maximize pit road trying to get around the 88 and spun myself. We came from the back three times to finish ninth. Just five points out heading into Bristol.”

Quote: “We had a fast Silverado today! I spun the tires on a late restart that cost our team some valuable track position, and ultimately, our chances at a solid Top 10 finish. Regardless, it was a great effort from my No. 23 guys today, onto Bristol in less than two weeks!”

Quote: “Man, what a wild first race at Darlington. It was tough to get all of that damage in Stage 2, but it was still a good learning experience as we were able to run all the laps today. We will move onto the next one!”

Quote: “We started off decently today, made up a good amount of spots in Stage 1, but that was unfortunately the highlight of my day. Our truck really never had the long run speed needed to contend up at the front. Definitely not the finish we were looking for, but we will move onto the next one and keep on working.”