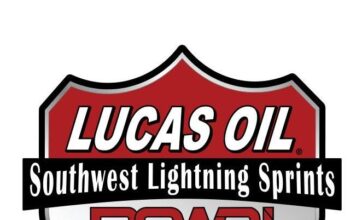 (Lakeside, CA, September 16, 2021) After what seems like an eternity – actually it has only been one month off – the Lucas Oil Southwest Lightning Sprint Car Series returns to the Barona Speedway this Saturday night, September 18th. The race will be a wingless affair and it will be the next to last event for the series on the San Diego County quarter-mile oval in 2021.

Lakeside teenager Grant Sexton, who has led the championship point standings most of the way this year, carries an 81-point advantage over teammate David Bezio going into Saturday’s race. Braden Chiaramonte of El Cajon and Matt Sotomayor of Alpine are not only fighting for third in the standings, but also for the “Rookie of the Year” title. Chiaramonte is currently 73-points up on Sotomayor and he is only 41-points behind Bezio. San Diego racer Parker Dumas is currently in fifth.

The last three SWLS races have produced three different winners. Point leader Sexton won on June 12th. Bezio took his lone win of the year on August 7th and Sexton’s father, Brent, won the last series race on August 28th. All told, through the first nine races of the year, there have been six different winners. As is the case in points, Grant Sexton leads the series in victories as well with three. Brent Sexton has two wins and is the only other driver in the series with more than a single victory. Indio’s James Turnbull, Dalton Sexton of Lakeside, Dumas and Bezio have one win each.

After the last SWLS race at Barona on October 2nd, the series will take two months off before returning to action in the “1st Annual Lettuce Bowl” at the Imperial Valley Raceway in Imperial, California. The races will be on Saturday night December 4th and Sunday afternoon December 5th. The club will combine with the WRA Midgets for two wingless shows. The races will bring down the curtain on the 2021 SWLS season.

Joining the SWLS at Barona this Saturday will be the Modifieds, Sport Mods, Street Stocks, Sport Compacts, Pure Stocks, 360/410 Sprint Cars, Mini Dwarfs and Junior Sprints. For fans who would like to attend Saturday’s race, the gates will open at noon with racing at 5:00 p.m. Fans can bring coolers and barbecues if they wish. The track is located at 1754 Wildcat Road in Lakeside (92040). The track website is https://baronaspeedway.com/ and the office phone number is (619) 749-8115.