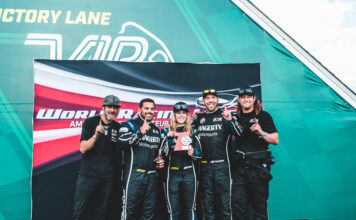 Danville, Va. (18 September 2021) – After eight hours of racing at VIRginia International Raceway, Round 3 Racing wrote a new chapter of its Cinderella story by capturing the team’s first GP1 class win on Saturday.

The No. 701 Team Cooper Tires Porsche Cayman earned a place on the top step of the opening race of the weekend marking the eleventh World Racing League podium for the Joliet, Illinois-based team.

Since the introduction of the No. 701 Team Cooper Tires Porsche Cayman to R3R, Loni Unser, Mo Dadkhah and Mike Gilbert have fought an uphill battle. That persistence paid off as the Team Cooper Tire squad collected its first GP1 class win of the season.

Flawless driving, strategy and pit stops allowed Unser and Dadkhah to soar through competitor traffic and gain a two-lap advantage. Gilbert took the No. 701 Porsche Cayman to the checkered flag in the top spot.

The win at VIRginia International Raceway is the second for the Team Cooper Tire drivers as they won in the GP2 category at Mid-Ohio Sports Car Course before the change to the GP1 class.

“Loni (Unser) drove flawlessly, Mo (Dadkhah) drove flawlessly, we made no mistakes as a team,” said Gilbert. “I am over the moon with this result. To think of where we were at Road America when we first started with this car and where we are now is amazing. The work put into this effort by Marc (Gamora), Brad (McCall), Buz (McCall) and the entire Round 3 Racing team is remarkable. This truly is a team win.”

With the second-best starting position on the GP3 grid, Ptak immediately experienced a loss of power as the green flag flew, moving the Porsche Boxster to the back of the pack. As lead engineer Steve Mason worked to pinpoint the issue, the Hagerty Drivers Club drivers pushed through 45 laps before necessary maintenance was required.

Quick work by the Round 3 Racing crew found the faulty fuel valve and mended the fuel pump. 28 minutes later the No. 605 Hagerty Drivers Club Porsche Boxster returned to competition on lap 88. With maintaining the championship lead as the goal, Neel, Pease, Ptak and Loftsgard circulated the Virginia course until the checkered flag and crossed the finish line in ninth.

“We had some power issues in terms of not being able to get the full power down the straightaway and down a few miles an hour as a result,” said Loftsgard. “Race cars are such finicky things especially in today’s day and age with how much technology is in these things so it’s kind of hard to pinpoint it but I consider ourselves fortunate today that we were able to at least make some good headway on it and pretty confident that that we have something to fight with tomorrow.”

The return of the No. 601 Team Sentinel Porsche Boxster to the R3R entry list marked a homecoming for James Candelaria in the driver lineup alongside Christian Maloof and Hannah Grisham as well as a welcome to the new Porsche Boxster chassis.

The Team Sentinel driver trio pushed through the 3.57-mile course gaining speed with each lap with Candelaria setting the Boxster’s fastest lap of the race on lap 73. Just 10 laps later, the No. 601 Porsche became stranded off-course as a loose shifter forced the car to be towed back to the paddock.

While mending the shifter, electrical issues were diagnosed by the R3R ultimately causing the No. 601 Team Sentinel Porsche Boxster to be parked for the remainder of the race.

The Hagerty driver trio of Sarah Montgomery, Brad McCall and Buz McCall was on the way to its best race of the 2021 season before a mechanical gremlin sidelined the car.

Starting from 13th, Montgomery took the first stint, quickly working up the running order to fifth in the opening 10 laps. Trading the driver’s seat with Brad McCall on lap 48, McCall wheeled the Porsche through the 17-turn course to gain 13 positions.

Buz McCall was slated for the third stint of the eight hour race under the punishing Virginia sun and humidity. The extreme conditions didn’t faze McCall as he laid down his fastest laps of the weekend while maintaining the fourth spot on the running order.

Unfortunately, the stellar run for the elder McCall came to a premature end when the Team Hagerty Porsche Cayman suffered a broken ball joint on lap 103. The crew went to work making the necessary repairs in order for the No. 702 to return to competition. Montgomery returned to the course with under one hour remaining in preparation for Sunday’s race.

“The No. 702 Team Hagerty Porsche Cayman was a remarkable car to drive today,” said Buz McCall. “We were in the best position that we have been all season and remained competitive through each stint. While our day did not end as we hoped, the mechanical issue has been addressed and we are able to race tomorrow. I was very fortunate that I went off where I did or it would be a different story.”

The Round 3 Racing squad will return for another 8 hours of endurance racing tomorrow September 18th. Live streaming of all the action from VIRginia International Raceway is available at Youtube.com/RaceWRL alongside live in-car streaming of each Porsche entry. Streaming links will be available via the team’s Twitter (twitter.com/Round3Racing).