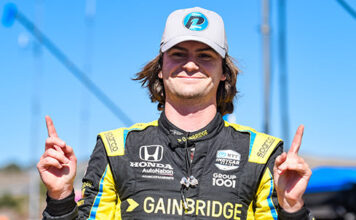 He’s halfway toward that dominant equation again at the track that could be nicknamed “Herta House.”

Herta earned the NTT P1 Award on Saturday with a top lap of 1 minute, 10.7994 seconds during the Firestone Fast Six in the No. 26 Gainbridge Honda fielded by Andretti Autosport with Curb-Agajanian. It was his seventh career pole and series high-tying third top spot of the season.

“I’m glad we ended up doing three (laps in final stint of qualifying) because I guess two wasn’t enough,” Herta said. “I really got to nail that third lap. The Gainbridge car was awesome, awesome being powered by Honda. What an amazing track. I love this place so much. Two for two for poles here.”

Herta has two poles and one victory at the 11-turn, 2.238-mile circuit that features the famous “Corkscrew” turn complex. His father, Bryan, who serves as his strategist, won INDYCAR SERIES races in 1998 and 1999 at this track, both also from the pole. Bryan Herta also won the pole here in 1997.

Live coverage of the 95-lap race starts at 3 p.m. (ET) Sunday on NBC and the INDYCAR Radio Network. A 30-minute warmup session will precede the race at noon (ET), live on Peacock Premium.

Andretti Autosport found a silver lining in a challenging season by seizing the front row, as Herta’s teammate Alexander Rossi qualified second at 1:10.9951 in the No. 27 NAPA AUTO PARTS/AutoNation Honda.

2014 series champion Will Power will start third after a top qualifying lap of 1:11.1317 in the No. 12 Verizon 5G Team Penske Chevrolet. Power appeared to qualify second, but his quickest lap was nullified after race officials deemed he didn’t slow during a local yellow triggered near the end of the session when Pato O’Ward spun in the Corkscrew turn.

Championship leader Alex Palou will start fourth in the No. 10 NTT Data Honda after a best lap of 1:11.3317. Palou leads second-place O’Ward by 25 points with two races remaining in the season.

Oliver Askew burnished his credentials while auditioning for a full-time ride in 2022 by qualifying fifth – tying his career best – at 1:11.8937 in the No. 45 Hy-Vee Honda.

O’Ward will start sixth. His best lap in the Firestone Fast Six was nullified due to a penalty for his spin at the Corkscrew, with his second-best lap of 1:24.2715 standing up. But it still marked a significant recovery for the Mexican as he fights for the Astor Challenge Cup. O’Ward was 14th-quickest in the first practice Friday and dropped to 20th in pre-qualifying practice Saturday morning.

Among the other three drivers still mathematically eligible for the season championship, Chip Ganassi teammates Marcus Ericsson and Scott Dixon will start seventh and eighth, respectively. Ericsson is 75 points behind Palou in fifth in the No. 8 Huski Chocolate Chip Ganassi Racing Honda, while six-time series champion Dixon is fourth, 49 points behind Palou, in the No. 9 PNC Bank Grow Up Great Honda.

Qualifying struggles continued for the second straight race for two-time series champion Josef Newgarden. He will start 17th in the No. 2 Hitachi Team Penske Chevrolet, failing to advance from the first round of qualifying after leading practice Friday and registering the 10th-quickest time in practice this morning.

Newgarden was fast in practice last weekend at Portland but struggled in qualifying, rallying to a fifth-place finish after starting 18th. He is third in the standings, 34 points behind Palou.

Any driver 55 points or more behind the leader after this race will be eliminated from championship contention entering the season-ending Acura Grand Prix of Long Beach on Sunday, Sept. 26 at Long Beach, California.