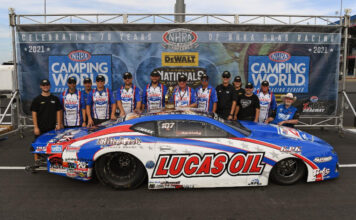 Chevrolet moves on in Countdown with two points leaders

CONCORD, N.C. (Sept. 19, 2021) – The stars were aligned for Greg Anderson to pass Warren Johnson as the all-time Pro Stock race winner: home race with spectator support from his car’s primary sponsor, low elapsed time of the event in the semifinals against reigning champion Erica Enders, advancing to his 165th career final round.

“This Lucas Oil Chevy Camaro is unbelievable,” the second-generation Pro Stock driver said. “Greg, he’s ‘The Man.’ He tunes this hot rod and he gave me all it got. I didn’t think about keeping Greg from getting his win; I needed to get this done.

“It’s awesome. This is what I’ve wanted my whole life.”

No. 1 qualifier John Force, who entered race day second in Funny Car points, appeared to take a quarterfinal victory. But his PEAK Antifreeze & Coolant Chevrolet Camaro SS clipped a center lane timing block near the finish line, which is an automatic disqualification according to NHRA rules.

Force picked up his NHRA record-extending 162nd top qualifier honor. He and daughter Brittany have qualified No. 1 at the same event three times this season and shared the winner’s stage at Topeka, Kansas.

Teammate Robert Hight, the No. 2 qualifier in the Automobile Club of Southern California Camaro SS for the second consecutive event, fell in the first round.

In the final, Anderson’s HendrickCars.com Camaro SS was a tick quicker off the line, but Koretsky drove around the four-time champion for the win after three runner-up finishes over the 21 races in the 2020-21 seasons. Anderson, who tied Johnson for the career record a week earlier in Reading, will aim for his 98th win Sept. 26 at World Wide Technology Raceway. “The next five days can’t go by quick enough,” said Anderson, who said a clutch part broke heading to the starting line.

“I left one on the table. I’m happy for Kyle; he cut an 0.11 (of a second) light in the final. Give him credit; he earned it. You try to make our stable of cars as fast as you can and eventually you’re going to have to run against your own best stuff. A great day for Kyle Koretsky and an almost great day for Greg Anderson.”

Enders’ first round marked the 600th time she pulled up to the starting line for eliminations. Her first round win came at the 2005 event in Reading.

Round 3 of the Countdown to the Championship will be contested Sept. 24-26 at World Wide Technology Raceway in Madison, Illinois. In addition to the pro categories, the seventh round of the Constant Aviation Factory Stock

HOW DID THE THREE RUNNER-UP FINISHES MOTIVATE YOU?
“There’ll all special. I’m out here living my dream. KB Racing supplies me with the best power out there. Our team just works flawless. I raced Dallas (Glenn) today and after he lost he jumped right on my car to help. This is huge.”

YOU WANTED TO RUN PRO STOCK AND IT WAS A SACRIFICE JUST TO GET HERE.
“Pro Stock is the most competitive class our there in NHRA, I think. We linked up with KB and they have the R&D to do it, so it’s been great. This is the first Wally for our family. I feel bad for Greg (Anderson) but I feel great.”

WHAT DOES THIS MEAN TO YOU?
“My dad (Kenny) worked his whole life and gave me the opportunity to do it. He told me if we win we could party but make sure I’m back at work at 6:30 Monday morning. Before the final, he said ‘Just do your thing. Treat it like any other round. Dig deep’ and that’s what I did.”

HOW DID THE FINAL AT INDY PLAY IN YOUR MIND?
“Indy was huge. I felt really confident. The car was running great. I thought Indy would be my first one and I don’t think I could ever top that, U.S. Nationals. Coming into Maple Grove, my home track, and I had more than 100 people there. I felt good there, too. I struggled a little bit on Saturday and didn’t get it done on Sunday. We come to Charlotte – Greg’s home and KB Racing’s home. We knew Ken and Judy Black would be here, so we knew we had to make it an all-KB final. They put their heart and soul into this team. I didn’t think about keeping Greg from getting his win; I needed to get this done. That guy is unbelievable. He’s the best.”

YOU’RE NOW A CHAMPIONSHIP CONTENDER.
“The Countdown is huge; it’s something I always wanted to do. To win the championship, to be honest I’m not even really looking at that now. I’ll take every race one at a time and that’s the way I look at it. Would I like to get one of those white hats? 100 percent.”

BRITTANY FORCE, JOHN FORCE RACING, MONSTER ENERGY CHEVROLET DRAGSTER (No. 1 qualifier, runner-up): “Tough for a driver to lose in the final round that way. Fortunately, I have a great group of guys around me in this Monster Energy/Flav-R-Pac team and we’re staying positive. We’re still out front and, overall, we had a great weekend: going to the finals, getting that eighth No. 1 in a row and picking up a lot of bonus points. I’m going to put this weekend behind me, build from it, move on and plan to win the next one.”

JOHN FORCE, JOHN FORCE RACING, PEAK ANTIFREEZE & COOLANT CHEVROLET CAMARO SS (No. 1 qualifier, fell in quarterfinals): “My guys, Danny Hood, Tim Fabrisi, Joe Barlam, all those young kids over there, they’ve given me a great race car. This PEAK Chevy is really running. We’re still in the hunt, just got a little loose, put a couple holes out. We’ll get it fixed, I’ll get back at it and we’ll be good to go.”

ROBERT HIGHT, JOHN FORCE RACING, AUTOMOBILE CLUB OF SOUTHERN CALIFORNIA CHEVROLET CAMARO SS (No. 2 qualifier, fell first round): “Wasn’t our race today. We stumbled in the first round. Ust making it harder on ourselves going forward, but it’s nothing we can’t handle. There are five races left. I said from the beginning I thought you’d have to win three to get this championship. This Auto Club team can still do that.”

GREG ANDERSON, KB RACING, HENDRICKCARS.COM CHEVROLET CAMARO SS (No. 3 qualifier, runner-up, points leader): “The stars were aligned, I had a great car and something in the clutch broke. I went to start the car and drive up to the water and some $5 part broke. It cost me. It’s just another way to lose. I can’t feel bad; we had a great day, everything was going swimmingly. It was a first for me. I at least gained a few points. We love racing here, it’s home for us, no matter where we started our lives and our careers. I don’t know that you have an advantage racing at home, but it’s a powerful motivator to have your team owners, sponsors, friends, and family cheering you on. You want to win every race you go to, but there is always something special about racing here.”

DALLAS GLENN, KB RACING, RAD TORQUE SYSTEMS CHEVROLET CAMARO SS (No. 5 qualifier; fell in quarterfinals to winner Kyle Koretsky): “First round was not really a good run so I knew right away I wouldn’t get lane choice against Kyle. I was trying to be as tight on the Tree as I could because I know Kyle has a great car. We’ve had to race eight times this year and we’re 4-4 now. Overall, it was a good day; we didn’t lose anything in the points.”