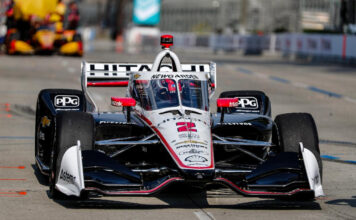 LONG BEACH, CALIF (Sept 25,2021) – Two-time NTT INDYCAR Series champion Josef Newgarden came into the season’s final weekend knowing exactly what he had to do to keep his championship hopes alive sitting third in the standings 45 points down to the leader.

So far the driver of the No. 2 Team Penske Chevrolet is one-for-one. He progressed to the Firestone Fast Six and turned that into the pole with a lap of 1 minute 08.22411 seconds/103.846 mph.

For the fourth time this season and 15th time in his career, he will lead the field to the green flag and add another NTT P1 Award to his trophy case. With today’s pole, Newgarden stays in contention for the season-long NTT P1 Award.

Scott Dixon, Helio Castroneves and Romain Grojean made up the remainder of the Firestone Fast Six, and will start second, third and sixth respectively.

NBCSN will telecast the 85-lap/167-mile race on the 1.968-mile, 11-turn temporary street circuit in Long Beach, California at 3 p.m. ET Sunday, Sept. 26. The race will be broadcast live on INDYCAR Radio Network affiliates, Sirius 211, XM 205, Indycar.com, and on the INDYCAR Mobile app powered by NTT DATA.

DRIVER QUOTES:
JOSEF NEWGARDEN, NO. 2 HITACHI TEAM PENSKE CHEVROLET – POLE WINNER
YOU ARE FIRED-UP! THAT IS GREAT TO SEE. YOU DID WHAT YOU NEEDED TO DO
“There’s some guy roaming around Long Beach that has just been yelling all weekend and getting us fired-up (laughter), and I was pretty much screaming that whole last lap. He’s at the track somewhere. He’s just getting me hyped. He was getting all of us hyped. He needs to be in this pit box.

“I’m so happy. It’s been a little bit demoralizing the last couple of weekends where we’ve qualified. We’ve had really good cars. The team has been doing a phenomenal job, Gavin (Ward, Race Engineer) and all the boys. They’ve been killing it. To start where we’ve started these last couple of races has just taken the life out of me a little bit. So, I’m so pumped that we were able to be quick here. I think we’ve got the package, for sure, with Team Chevy. I wish we had more of a fight with Colton (Herta). He was going to be really tough to beat today. It’s a shame we didn’t get to fight him straight up, but you know what? We accomplished our job for today and now we have to go after it tomorrow.”

YOU HAVE A CHANCE AT THE CHAMPIONSHIP. IT HAS TO GO REALLY BAD FOR ALEX PALOU. HOW DO YOU APPROACH TOMORROW? IT SEEMS PRETTY SIMPLE SINCE YOU CAN’T CONTROL THEM
“Yeah, I mean look, we’ve fought hard all year. We’ve had ups and downs. It’s very unprobeable for us to win this championship. So, I think our goal is to win the race tomorrow. Let’s finish our season on a high note. Everyone here deserves that. We’ll see what happens. I think it’s pretty unlikely, but you never say never in this sport.”

DOES SECOND IN THE CHAMPIONSHIP MATTER? IS THERE SIGNIFICANCE IN THAT IF YOU CAN GET PAST PATO O’WARD?
“Well, we always want to maximize our potential. If second is what we can do for the year, then we want to get that done. I know that’s what’s important to Roger (Penske) and the team and the same with me. So, we’re going to do everything we can to finish as high as possible and we’ll see where the chips fall at the end of the day.”

FELIX ROSENQVIST, NO. 7 VUSE ARROW MCLAREN SP – QUALIFIED 5th
WALK US THROUGH ALL THE CONFUSION TO MAKE IT TO THE FAST 12, WHAT WAS YOUR TAKE ON THE LOCAL LEVEL AND EVERYONE SAYING YOU DIDN’T SLOW DOWN, YOU SAID YOU DID SLOW DOWN. WHAT WAS THAT ALL ABOUT?
“Man, I don’t know how they judged that because I’m happy I got through and we were fast enough to get through. But man, the car was standing there, and they kept the yellow for two or three laps and its qualifying. You have to push. But I wasn’t pushing. I was slowing down like three-tenths in that section, which I thought was safe. So yeah, I think we just have to be more clear on how the rule works. But anyway, I thought it was a good session. We ended up P-5. Maybe wanted a little bit more out of the Fast Six, but it was good qualifying again.”

TALK ABOUT THE SPEED IN YOUR CAR, BUT ALSO HOW YOU CAN HELP YOUR TEAMMATE TOMORROW? THAT’S GOING TO BE THE FOCUS FOR THE ENTIRE ORGANIZATION AT ARROW MCLAREN SP
“Yeah, we haven’t talked a lot about it yet but I think tonight we’ll go through potential scenarios. The fact that we’re up there is helpful. I think that’s a really good thing that both cars are starting in the top – 10. It just gives you more window to play around with things, with strategy, and potential outcomes that can happen in the race. It’s INDYCAR and you never know what’s going to happen tomorrow. We kind of have to get through Turn 1 and then we’ll see where we are. I’ll just push and do my best race.”

SIMON PAGENAUD, NO. 22 MENARDS TEAM PENSKE – QUALIFIED 4th
YOU SAID IF YOU COULD HAVE GOTTEN A LITTLE BIT MORE OUT OF THE HAIRPIN, YOU MIGHT HAVE BEEN ON THE POLE
“Yeah, I was on the lap and went hard in the hairpin and it was a little too much for the car. I may have lost second position there, but I tried. The goal was to go for pole position but Josef (Newgarden) sticked a really good one in. Great for Team Penske to be one and four. And tomorrow, we get to go racing. It’s my favorite track, so I’ve been enjoying the weekend.”

YOU’VE BEEN IN THESE CHAMPIONSHIP BATTLES. PATO O’WARD STARTING 8th AND ALEX PALOU STARTING 10th. HOW WOULD YOU PLAY THE GAME IF YOU WERE THOSE GUYS? AND ARE THEY NERVOUS TONIGHT STARTING MID-PACK LIKE THAT?
“Well, first of all, personally, and I’m sure it’s the same for a lot of drivers. But it’s awesome to be in the fight in the end. You’re doing this to be in the fight in the last race and Pato and Palou are in it. Man, Pato is in a tough situation. He’s starting mid-pack you know, and it’s been a mess, mid-pack, lately. So, I’m sure it won’t be easy, but he’s got cold blood. He’s really good. And Indy after the crash, he came back and finished second, so he’s strong. He’s going to be able to manage the pressure, I’m sure. But it is not an easy situation he’s in but first you’ve got go through all the mess.”

TAYLOR KEIL, PRESIDENT ARROW MCLAREN SP AND STRATEGIST FOR PATO O’WARD:
ON CONFUSION AT THE END OF FAST 12 SESSION:
“I think we should (be in the Firestone Fast Six). We’ve actually got some data on our own team – I’m surprised Felix is through – frankly, good for him. Two cars we know went through the local yellow, but the results are official, so we have to make the best with what we’ve got. It’s unfortunate when the stakes are so high at the moment.”

PATO O’WARD, NO. 5 ARROW MCLAREN SP CHEVROLET – QUALIFIED 8th
I KNOW YOU CAN’T SEE WHAT THE OTHER CARS ARE DOING, BUT WHAT’S YOUR REACTION AND WHAT THE SITUATION IS WITH THIS RACE NOW IN NOT GETTING A CHANCE TO START IN THE FRONT COUPLE OF ROWS?
“Yeah, we should be in there. We were up on our last lap and I had eyes and I saw yellow flags and there were yellow flags until the end of the session. (Alex) Palou had to slow in front of me. I slowed up because that’s what you have to do whenever there are yellow flags. INDYCAR is never consistent with their calls. They need to review that because we should be in the Fast Six right now.”

THE CONSOLATION IS THAT ALEX PALOU IS RIGHT BEHIND YOU. WHAT CAN YOU MAKE HAPPEN TOMORROW? WHAT KIND OF STRATEGY OPTIONS DO YOU HAVE TO TRY TO WIN THE RACE AND MAYBE PUT HIM IN A BAD SITUATION?
“He’s not the only one we’re worrying about. There’s Josef (Newgarden), there’s Scott (Dixon) that are in there and we should be fighting against at least for pole. I don’t know if we quite had it for the pole, but we definitely had it to get into the Fast Six. It’s a crappy situation. A bummer. But we’ll see what we can do.”