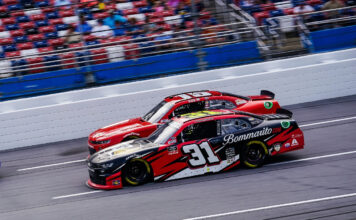 – BG Products; BG products are proven to make vehicles last longer and perform better. In partnership with an international network of distributors, BG serves the driving public with innovative automotive maintenance products. To see an entire catalog of what BG has to offer visit them online at BGProd.com.

After 28 events and the 18th race JAR has been eligible for, JAR continues to hold the 27th position in the NXS Owner Point Standings after Anderson’s 5th place finish on Saturday.

IndyCar Veteran Sage Karam will make his third start behind the wheel the Jordan Anderson Racing No. 31 Chevrolet Camaro SS when the NASCAR Xfinity Series continues at the Charlotte Motor Speedway Roval; Saturday, October 9, 2021 for the Drive for the Cure 250. LIVE coverage will be on NBC Sports Network (NBCSN), Performance Racing Network (PRN), and SiriusXM Channel 90 at 3:30 P.M. EST.

After 19 events, JAR remains in the 33rd position in the NCWTS Owner Standings after Anderson’s 11th place finish on Saturday.

Sage Karam will look to make his NCWTS debut in the JAR No. 3 Chevrolet Silverado when the NCWTS visits Martinsville Speedway for the United Rentals 200; Saturday, October 30. LIVE coverage will be on Fox Sports 1 (FS1), Motor Racing Network (MRN), and SiriusXM Channel 90 at 1:00 P.M. ET.