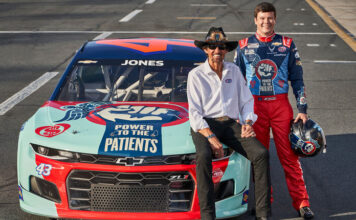 Richard Petty Motorsports and Power to the Patients formally announced their partnership and revealed the unique paint scheme of the No. 43 Chevrolet Camaro ZL1 1LE at a live event today in Times Square. They were accompanied at the car’s unveiling by patients who have joined the race to lower the cost of healthcare through price transparency. These patients’ lives have been harmed and devastated by unexpected hospital bill overcharges that could have been prevented with access to competitive and fairer prices.

This grassroots campaign informs healthcare consumers, including patients, workers, unions, and employers, of their right to control their healthcare decisions by choosing the best care at the best prices and lowering their cost of care and coverage. NASCAR drivers are among the world’s best, and if we all get behind the wheel like them when it comes to our healthcare, we can win the race to drive down costs. On January 1, 2021 a federal law required all hospitals to post their actual price upfront. Starting July 2022, the transparency in coverage rule takes effect, requiring health insurers and health plans to post their actual prices so all Americans can enjoy systemwide price transparency.

Unfortunately, hospitals have hit the brakes on this movement by refusing to comply with the law. The Biden Administration is about to finalize a federal order to meaningfully increase penalties on noncompliant hospitals that will put price transparency in overdrive. The No. 43 Power to the Patients Chevrolet Camaro ZL1 1LE informs patients that they can shift their healthcare into a higher gear by demanding prices to lower their costs and give their families financial certainty.

“Our team joined the ‘Power to the Patients’ movement to provide awareness to combat hidden prices of healthcare. A patient’s right to access information regarding their healthcare is crucial, and we are honored to join the campaign. Power to the Patients empowers patients and their families with an understanding of the financial obligations of their medical decisions.” – Brian Moffitt, CEO at Richard Petty Motorsports

“It’s beyond exciting for Power to the Patients to be in the NASCAR arena with the legendary Richard Petty Motorsports and driver of the iconic No. 43, Erik Jones. We’ve teamed up to put patients in the driver’s seat by raising awareness about their right to upfront hospital prices. Too often going to the hospital has put patients’ financial health in the balance, but as more and more demand hospital prices and make informed decisions they’ll save their hard-earned money and win the race against runaway healthcare costs.” – Kevin Morra, Power to the Patients

About Healthcare Price Transparency
For years, hospitals were able to obscure their prices until weeks or months after care, surprising patients with exorbitant bills that too often burdened them and their families with crushing debt. Even in the same hospitals, prices for routine care such as C-sections and MRIs can vary by ten times depending on the payer. But, on January 1, 2021 a new Center for Medicare and Medicaid Services rule took effect requiring hospitals to provide actual prices, including discounted cash prices and all contracted rates by payer and plan. The healthcare industry resisted and even sued unsuccessfully to avoid following the rule. According to a recent study by PatientRightsAdvocate.org, only 5.6% of American hospitals are fully complying with the law. Healthcare price transparency has drawn broad bipartisan support across multiple presidential administrations and in both the House and the Senate. That’s why members of Congress from both sides of the aisle are calling for stiffer penalties for hospitals that don’t publish their prices as required.

Polls confirm that 90% of the country supports healthcare price transparency. Through its awareness campaign, Power to the Patients strives to inform every American that “Prices are Now a Patient’s Right” and encourage everyone to exercise this right. As more and more Americans “Demand Hospital Prices,” they’ll not only put pressure on hospitals to meet their transparency obligations and put themselves in a position to compare prices and save money, but also drive down the cost of healthcare as providers are forced to compete.

About “Power to the Patients”
Power to the Patients is a non-profit organization that advocates for transparency in healthcare prices. Created in the wake of a new federal rule that took effect January 1, 2021 requiring hospitals to publish the actual prices they charge, the group has since forged a grassroots movement that’s committed to empowering patients to take charge of their physical and financial health.

Celebrities from multiple fields – film, sports, theater, music, and comedy – have joined the movement in the race to lower healthcare costs through consumer empowerment. Acclaimed artist Shepard Fairey joined the movement after “seeing the devastation the high cost of medical bills can create in people’s lives.” Award-winning actresses Susan Sarandon and Cynthia Erivo came together to film a stirring PSA that aired during this year’s Academy Awards.

How To Recover After A Truck Accident