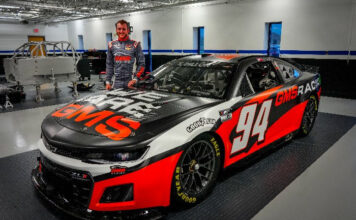 Statesville, NC – GMS Racing is proud to announce that Ty Dillon has been signed to drive full-time in 2022 as the flagship driver for the team’s inaugural entry in the NASCAR Cup Series.

Dillon, who has competed in over 160 NASCAR Cup Series races since 2014, brings a wealth of knowledge and experience to the table as GMS Racing makes the big step up to the top rung of the NASCAR ladder. To his credit, the Lewisville, NC native has one win in the NASCAR Xfinity Series, three wins in the NASCAR Camping World Truck Series, and nine wins in the ARCA Menards Series, where he was crowned champion during the 2011 season.

“It’s such an honor to be able to drive for GMS Racing as they take the step into the NASCAR Cup Series for the first time, and that they have chosen me as their driver for the future. It’s been a challenging year off from racing full-time but I’m so excited to return. I don’t think that there is going to be another driver that is more hungry than I am next year to get back out there and prove what I am capable of in the Cup Series. I am excited for our future and am ready to get to work,” said Dillon.

Chevrolet will continue to serve as the team’s manufacturer across all series, strengthening a relationship that dates back to the team’s roots in ARCA in 2011. Every GMS Racing race car or truck to hit the track has been a Chevrolet vehicle, delivering wins across ARCA, NASCAR Camping World Truck Series, and NASCAR Xfinity Series competition.

GMS Racing will field the No. 94 Chevrolet for Dillon, a number that has historical significance to Team President, Mike Beam. Over 25 years ago in 1995, Beam partnered with legendary NASCAR Hall-of-Famer Bill Elliott to spearhead Bill Elliott Racing, a team that fielded the iconic No. 94 entry throughout the late 1990’s. The original Bill Elliott Racing shop is still a part of the GMS Racing campus today, hearkening back to the team’s roots and past success.

“We are excited to welcome Ty to the GMS Racing family. Going full-time cup racing in 2022 is a big step for us and I can’t think of a better driver than Ty to lead us into our first year in NASCAR’s top series,” said Beam.

The No. 94 Chevrolet will be featured as an alliance with Richard Childress Racing, one of the most established race teams to compete in the sport, garnering six NASCAR Cup Series championships and over 200 wins combined across the top three NASCAR national series. In addition, ECR Engines will supply Dillon and the No. 94 team with Chevrolet power throughout the season.

The newly paired duo’s first outing will take place at the NASCAR Next Gen test at the Charlotte Motor Speedway Roval on Monday, October 11th, and Tuesday, October 12th. More information, including sponsorship and crew chief pairing will be announced at a later date.

“GMS is always looking forward and I believe this is the next step for the team in that process,” said Team Owner Maury Gallagher. “We have the goal to be a championship caliber team in any series in which we compete, and I am excited to watch the team grow in the coming years.”

The 2022 NASCAR Cup Series season kicks off with the 64th running of the Daytona 500 at the historic Daytona International Speedway on Sunday, February 20th. Stay up to date with all GMS Racing news by visiting the team’s official website at www.GMSRacing.net, or by following along on social media with the handle, @GMSRacingLLC.