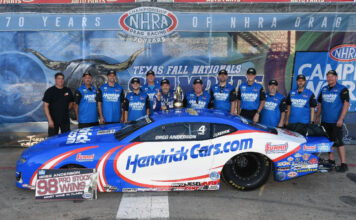 ENNIS, Texas (Oct. 10, 2021) – Greg Anderson’s 98th National Hot Rod Association (NHRA) Pro Stock victory was 24 years in the making and what seemed like a lifetime in his dreams.

The driver of the HendrickCars.com Chevrolet Camaro SS broke a tie with Warren Johnson to become the winningest driver in NHRA Pro Stock history and second in all professional classes to Chevrolet driver John Force’s incomparable 154 victories by defeating Texas native Chris McGaha in the final of the Texas NHRA FallNationals at Texas Motorplex.

“I couldn’t imagine one win and here we are 98 wins later,” said Anderson, who also tied Johnson for the second-most elimination round wins at 877 among all professional classes. “What a run. I seem to be getting all the accolades right now. It’s not me, it’s this KB Racing team. I’m on top of the world. What a career it’s been. The best part of the whole deal is I don’t think I’m done yet.”
Anderson, 60, an integral part of Johnson’s success with GM products in the class as a crew member and crew chief for more than a decade, competed in his first NHRA race in 1998 and picked up his first victory by defeating Jim Yates on April 29, 2001, at Bristol Raceway. Every Anderson win has also been in a GM car.

“Congratulations to Greg Anderson on becoming the winningest driver in NHRA Pro Stock. We are proud that Greg’s 98 victories have all come behind the wheel of a Chevrolet and other products from our company,” said Jim Campbell, Chevrolet U.S. vice president of Motorsports and Performance.

“Greg has done an incredible job on the track and in leading an outstanding team of talented crew members and engineers in preparing his Camaro SS.
Greg has also been a great representative for Chevrolet and his team on and off the track. We look forward to the balance of the 2021 season as Greg pursues his fifth Pro Stock world championship.”

A day earlier, for the second time in three events and fifth time in 15 races this season, Chevrolet drivers in Top Fuel, Funny Car and Pro Stock swept the No. 1 qualifier spots.

Brittany Force earned her 11th Top Fuel top qualifier honor of the season, driving the Monster Energy/Flav-R-Pac Chevrolet dragster to track records of 3.637 seconds at 335.32 mph. The elapsed time is the fifth quickest in NHRA Top Fuel history. Force holds the record of 2.623 seconds, set in 2019 at Reading. Tony Schumacher holds the class single-season record for most No. 1 qualifiers with 13 in 2006.

Force, second in the standings, fell on a holeshot in the semifinals.
Teammate Robert Hight, driving the AAA Texas Camaro SS, scored his second No. 1 qualifier of the season and 70th of his career – sixth on the NHRA all-time list — with a run of 3.878 seconds at 331.94 mph. He lost in the quarterfinals. John Force, the No. 11 qualifier, also fell in the quarterfinals in the PEAK Antifreeze & Coolant Camaro SS.

Anderson, the No. 1 Pro Stock qualifier for the 10th time this season and 116th time in his career, extended his NHRA record by qualifying for his 414th consecutive race. The record win came in his 166th final, which includes eight this season.

“People kept asking me, ‘Where are you going to get it done?’ ” said Anderson, who won for the sixth time at Texas Motorplex. “As soon as I stepped out of the car I got a call from Mr. Hendrick – Kyle Larson won today, too, in a Chevrolet – and Jim Campbell, the VP of Chevrolet jumps on the phone excited as can be, so big day for Chevrolet and Hendrick Motorsports. I’m honored to be part of it.”

McGaha, who had reached the semifinals once in the previous 14 races in the Harlow Sammons of Odessa Camaro SS, bounced Aaron Stanfield, a three-time winner this season in the Janac Brothers Camaro SS, in one of the semifinals. Anderson knocked out Troy Coughlin Jr., driving the JEGS.com/Elite Motorsports Camaro SS, in the other.

Anderson increased his points lead to 81 over reigning Pro Stock champion Erica Enders, who fell in the quarterfinals to Stanfield. Both drivers are seeking their fifth NHRA Pro Stock world championship.

Pro Stock competitors have off until Oct. 29-31 at The Strip at Las Vegas Motor Speedway. The John Force Racing trio will aim to gain ground in the standings Oct. 15-17 at the NHRA Thunder Valley Nationals at Bristol Dragway in Tennessee. FS1 will telecast eliminations live at 2 p.m. ET Sunday, Oct. 17.

An interview with Pro Stock winner GREG ANDERSON, KB RACING, HENDRICKCARS.COM CHEVROLET CAMARO SS:
WHAT’S THIS MEAN TO YOU?
“I’m trying to figure it out. It’s been such a big build up and I’ve had such a fantastic race car all year, it was almost impossible for it not to happen. At the same time, there are so many great drivers in this class that are capable, want to and will whip you. It’s been happening so often, so there’s no guarantee that it would happen. Who knows, maybe next year my car won’t be so good. I can’t say I put a lot of extra pressure on myself, but I certainly expected myself to step top the plate and get it done. I would have been disappointed if I didn’t get it done this year. As soon as I stepped out of the car I got a call from Mr. Hendrick – Kyle Larson won today, too, in a Chevrolet – and Jim Campbell, the VP of Chevrolet jumps on the phone excited as can be, so big day for Chevrolet and Hendrick Motorsports. I’m honored to be part of it.”

NINETY-EIGHT. THAT’S A BIG NUMBER.
“I didn’t think I’d see one. What a career it’s been. The best part of the whole deal is I don’t think I’m done yet. I’ve had a lot of victories here that have been special. They’ve been career-changing and they’ve been year-changing and championship-clinching. It’s a great place to race; it’s great for Pro Stock cars.“

WHAT ABOUT WARREN JOHNSON?
“He taught me a ton. I would not be here without everything he did for me. One life was working for Warren Johnson – I learned a ton of what to do and what not to do – and I applied that to my next life, which is driving a race car and running a race team. People ask me every day, ‘Are you proud of all these wins you’ve had?’ I tell them I’m most proud of the team I’ve assembled. That’s been the story since day one. That’s probably the most important thing in all the years with Warren – you have to surround yourself with good people if you want to succeed. I’ve tried to practice that with this KB Racing team and (owners) Ken and Judy Black. I’m just a fortunate guy. It’s been my dream and what a dream it’s been.”

IS THIS A DOWNPAYMENT ON A FIFTH CHAMPIONSHIP?
“It is a great step. We had a great day and now we’re down to two races. It’s not in the books but I like my chances. I feel if I can find a way to win at least one of these races, I’m going to be the world champion this year. Try to win them both, obviously.”

TELL US ABOUT NO. 1.
“That was in Bristol in 2001. I’ll remember that until the day I die. I certainly was not expected to win; I didn’t expect to win. We got it done in our black Firebird. It was just a magical day and things just fell our way. Everybody said he’s a flash in the pan, one and done probably and we’ll never see him again. Well, here we are 97 times later.”

BIG POINTS DAY AS WELL.
“I come to all these races to win. That’s my goal. The points are secondary. There is no feeling like winning one of these events. That’s what it’s all about for us. We got it done today. It’s kind of cool; they all go together. If I concentrate on winning the race and making history, that gets me the most points and helps in the championship chase. The championship is going to be a battle right down to the end.”

BRITTANY FORCE, JOHN FORCE RACING, MONSTER ENERGY/FLAV-R-PAC CHEVROLET DRAGSTER (No. 1 qualifier, fell in semifinals, No. 2 in points): “Tough weekend for this Monster Energy/Flav-R-Pac team. We qualified well, we brought home the $15,000 check for going low Friday nights, got the No. 1 qualifier and then got beat in the semis. Overall, we picked up points and we went some rounds but to lose in the semis the way we did is tough. It was a close side-by-side race, but he had me on the tree. So, we’re going to pack up, go to Bristol and recover from this one.”

JOHN FORCE, JOHN FORCE RACING, PEAK ANTIFREEZE & COOLANT CHEVROLET CAMARO SS (No. 11 qualifier, fell in quarterfinals): “A little bit of a tough weekend out for this PEAK Chevrolet. We had some issues but I’m proud of my guys. Had to bring out the back-up car and they had some long nights and early mornings getting it ready. It ran good for a couple laps but had some bad luck with a cylinder going out in that second round. We’ll get it figured out and be ready for Bristol next week.”

ROBERT HIGHT, JOHN FORCE RACING, AAA TEXAS CHEVROLET CAMARO SS (No. 1 qualifier, fell in quarterfinals): “We had something going there for a while. It’s a good sign for these last three races. This AAA team is just focusing on taking it one run at a time and having some fun along the way. We had put a lot of pressure on ourselves and there’s still pressure, but we need to enjoy ourselves. We know how to race, Jimmy Prock and Chris Cunningham, they know what they’re doing.”