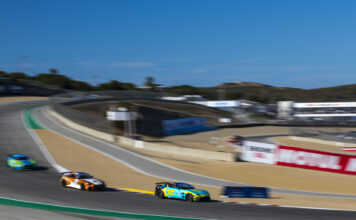 The No. 09 Stoner Car Care Aston Martin Vantage GT4, driven by Rob Ecklin, Jr. (Lancaster, Pa.) and Ramin Abdolvahabi (Palm Beach Gardens, Fla.), performed well throughout the two-hour race, pacing consistent laps. The team gambled on fuel strategy during their second pit stop and looked to be heading toward a top-10 finish until a late yellow meant the entire field was able to finish the race with no additional pit stops.

The team came into the weekend with high expectations, given the sheer number of hours they have spent at VIR this year (between a two-day test back in May and two eight-hour World Racing League enduros last month, the team had 24 hours of track time at the scenic, 3.27-mile road course).

With cloudy skies and cool conditions, Abdolvahabi took the wheel for the 15-minute qualifying session early Sunday morning, with the plan of setting a quick time early in case a red flag thwarted their late laps. That thought proved to be prescient, as Abdolvahabi broke through slow traffic just as a competitor went off track, bringing out the red flag. Starting 14th, he knew that steady early pace would be key to making his way through the field.

With the usual scrum at the green flag, Abdolvahabi stuck to the plan and played it safe in the early going, taking the measure of the drivers around him. Battling traffic, he fell to P18 in the first four laps but he began to regain those positions despite a quick off-and-on on Lap 7.

As drivers began to pit, Abdolvahabi climbed through the field to P10 before a full course caution. The team waited until the fuel light came on to bring him into pit lane for four Michelin tires and a change to Ecklin at the halfway point of the race. With the caution continuing, the team brought Ecklin back to pit lane for a splash of fuel they hoped would take him to the finish.

The strategy appeared to be working perfectly, as teams began to head to pit lane late in the race. But an untimely yellow with 20 minutes remaining meant that the rest of the field would also be set to go to the finish. Ecklin, with a smart and consistent drive, brough the Aston Martin home P15, with a best lap of 1:57.172 on lap 38.

The team was pleased with the performance, hoping that it will mean some of the bad luck they’ve experienced this season is behind them.

“I was stuck behind two Toyotas, and they didn’t give an inch,” said Abdolvahabi. “I was faster than they were, but we lost a lot of time through my entire stint. But the car was really good, we just couldn’t do anything with it. The pit stops were great, it’s just too bad that we couldn’t finish higher. But it’s good to finish, with no bad luck. No luck is better than bad luck, so things are trending in the right direction!”

“The car felt really good,” said Ecklin. “It was so consistent, but the pace didn’t match the feel. Otherwise, it was a good race for us. The car was set up well, the pit stop was good, we had a good strategy, and we went to work. We pushed hard, but I couldn’t get the time out of the car that I thought was there. But there was no drama today, it was just a good, clean race. We can build on that.”

“That was a good day,” said Automatic Racing team manager David Russell. “Everything was very sound, from the pit stops, driver changes, and the strategy call by Kirt Wightman and Chris Long. Ramin and Rob both drove good stints, though Ramin got stuck behind traffic. We were able to leapfrog a lot of cars with the strategy of coming in for fuel and we would have been in really great shape, but that late yellow put an end to that. But we had a strong car, though we were down on the pace we had here in testing, so we’ll have to figure that out. We have a good platform to build on for the finale.”

NBCSN will broadcast a two-hour race recap of the race on Thursday, October 14 at 3:00 p.m. Eastern (check local listings). Next up for the Stoner Car Care Racing Team will be the season-endingFox Factory 120 at Michelin Raceway Road Atlanta on Friday, November 12.