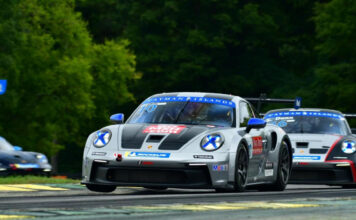 McClure stayed in touch with the Pro-Am class leaders in both races and dodged some of the off-course and contact incidents that sidelined more than one competitor in the weekend’s pair of 45-minutes races.

The Carrera Cup weekend was the second visit to VIR by McClure and TPC this year, which is the closest track on the IMSA schedule to both McClure’s home in Chesterfield, Virginia and the TPC Racing shop in Jessup, Maryland. McClure challenged for a podium position in the Porsche Sprint Challenge weekend at VIR back in June and won the “Apex’n Award” for passing the most cars on track during in the weekend’s second race.

Following a sixth-place finish in Saturday’s race after starting ninth, McClure pulled of some more key passes in Sunday’s second and final Carrera Cup sprint. Starting sixth, McClure picked up two positions at the start to move to fourth place on the first lap.

“I started sixth in Pro-Am and moved up a couple positions overall right at the start, but I still ended up sixth again in the race,” McClure said. “I’m a little disappointed, I had a great start, was fourth and I thought ‘I can do this,’ but braking in turns one through three a few laps later, I lost a position or two. It’s so hard. That was so much work, it’s crazy how you sweat it out on these, but it’s a blast.”

Shaking off the incident, McClure reset his focus and went to work on racing back into the top five until the finish.

“I caught fifth place at the end and we were separated by a tenth,” McClure said. “I should have taken one more chance, I almost got him in turns nine and 10, but it was good racing and we were clean. I made it to the end, and it’s amazing how much it takes out of you. It’s a work out. Everyone asks you if it’s fun, but fun is probably not the word. It makes you grow. You get out there and you’re anxious and wound up and you just have to go at it for 45 minutes in an almost a 3,000 pound car. It’s pretty cool, actually.”

McClure was the only TPC Racing entry this weekend but confidently carried the team flag after a successful test at VIR recently.

“It was a great weekend for Vernon,” said Harris Levitas, TPC Director of Race Operations. “Last week we were here testing, and a huge thank you to Billy Johnson who is also our TPC Racing and DSC Sport development driver for our products that we sell to the street car market. Our engineering staff worked hard with Billy for a full day and a half to help us get the car sorted. We’ve not had the time necessary to truly develop this chassis, and we found that last weekend and got a grasp on it. We have a fast car now, and Vernon is getting more and more comfortable in the car, which is truly important. We’re just going to keep making progress through an upcoming test and the season-ending race at Road Atlanta. We’re making great progress, our TPC Racing team worked hard all weekend and delivered a fast car right out of the trailer.”

Next up for TPC Racing is the season-ending tripleheader on Petit Le Mans weekend at Michelin Raceway Road Atlanta, November 10 – 12. The packed schedule features a pair of races Thursday, November 11 that set the stage for the next day’s final race of the year.