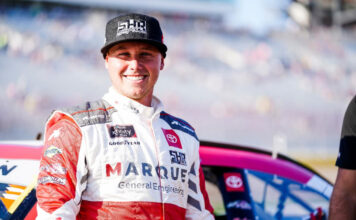 In addition to his already scheduled races at Las Vegas (Nev.) Motor Speedway last month and Texas Motor Speedway this weekend, Lupton will pilot the No. 26 machine at Kansas Speedway next weekend and the Xfinity Series season-finale at Phoenix (Ariz.) Raceway on Nov. 6, 2021.

“I am very thankful to add two more races with Sam Hunt Racing at Kansas and Phoenix,” said Lupton. “Even though our result in our first race together at Las Vegas wasn’t what we hoped, it was because of circumstances beyond our control.”

In his first Xfinity Series race since 2018, Lupton was a victim in a Lap 31-incident at Turn 1 at Las Vegas in the Alsco Uniforms 302, while running in the top-20 and turning lap times as fast as the top-six competitors.

“The Sam Hunt Racing team works hard, and they continue to bring fast race cars to the track every week,” added the former NASCAR Next alumnus. “It is our goal in our three remaining races together to go out there with a positive outlook and hope we can surprise some people with our finishes. I want nothing more than to end the season at Phoenix with a strong result and a great outlook on the 2022 season.”

Across NASCAR’s three national touring series divisions, Lupton, a native of Wilton, Calif. has made 54 career starts, including 36 in the Xfinity Series. Additionally, he has made four NASCAR Cup Series starts and 14 NASCAR Camping World Truck Series starts. His NASCAR career is highlighted with a career-best fifth-place finish at Kentucky Speedway in 2019.

Lupton has made NASCAR national series starts at the tracks remaining on his 2021 schedule. In Xfinity Series competition, Lupton has two starts at Texas, one at Kansas and three at Phoenix.

He also has a top-five finish in his most recent ARCA Menards Series premier start at Kansas last October finishing fourth after starting fifth for David Gilliland Racing.

“I’m extremely excited to add two more races to Dylan’s 2021 slate with us,” said team owner Sam Hunt. “We saw a lot of promise in his short stint at Vegas before getting caught up in the big wreck, and he showed us that he is capable of driving our cars forward with no practice and little seat time.

“We’re eager to get back to work with him and know he will get faster every lap he has. The team has some beautiful race cars prepped for the rest of the season and I have no doubts that Dylan might surprise some people with his speed.”

Sam Hunt Racing (SHR) is owned and operated by 28-year-old Sam Hunt, a former competitor in the NASCAR ARCA Menards Series (previously known as the NASCAR K&N Pro Series East). Hunt, who raced throughout his college career, opened the doors to SHR upon graduation from VCU in the Fall of 2017. SHR operated as an ARCA Menards East Series team from 2017-2019.

In late 2019, SHR transitioned to a NASCAR Xfinity Series operation, making its first start in the season finale at Homestead-Miami Speedway. The 2020 season — a part-time effort for the team — proved to be a promising year of growth and development.

Toyota has been a part of the NASCAR Xfinity Series since 2007 and will compete in their 500th event in the series later this season. They drove to their first Xfinity Series win with the late Jason Leffler in 2007, and have since scored over 170 victories and multiple driver and owner championships.