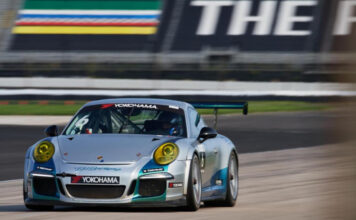 INDIANAPOLIS, Indiana (October 14, 2021) – TPC Racing returns to the Indianapolis Motor Speedway for the second time this season for a Porsche Sprint Challenge North America doubleheader on the IMS road course. Drivers Rob Lorndale and Jordan Wallace were with the team at the Porsche Together Festival exhibition races in September and return this weekend for the season finale, joined by Pedro Torres.

Both Lorndale and Wallace earned podium finishes in the pair of non-points paying races, with Wallace sweeping the Silver Class weekend in the No. 35 Dasbold/TPC Racing Porsche Cayman Clubsport. Lorndale earned a third-place and a second-place finish, his first podium appearances, in the Gold Class driving the No. 6 TPC Racing Porsche 911 GT3 Cup.

The pair of 40-minute races can be seen live via subscription on FloRacing.com. The first race gets the green flag at 3:55 ET on Friday, October 15, with the second at 11:05 a.m. on Saturday, October 16.

Despite missing the opening two events of the season, Wallace sits 10th in the Silver Class standings. A great run this weekend could leap him as high as fifth in the final championship in just his first season of competition.

Lorndale sits third in the Gold Cup for 991.1-generation Porsche 911 GT3 Cup race cars. Also a rookie in professional racing, Lorndale gets the opportunity to return to a track that he’s previously raced on for the first time.

Torres missed the non-points paying round at IMS, but has his No. 16 Stoneleaf/TPC Racing Porsche 911 GT3 Cup ready for a podium run – also in the Gold Class. Torres sits fifth in the season-long championship race.

Because of Sunday’s eight-hour race at Indianapolis Motor Speedway, the Porsche Sprint Challenge race event got underway with a Wednesday afternoon practice session. Two more practice sessions take place on Thursday, before qualifying on Friday, October 15 at 8:30 a.m. ET and the first race at 3:35 p.m. that afternoon. Saturday’s race begins at 11:05 a.m.

Missing the non-points paying race hasn’t seemed to matter to Torres, who led the week’s opening practice and was less than one-tenth away from the best time in practice two. Wallace was second in the Silver class in Thursday morning’s practice session.

Harris Levitas, Director of Race Operations: We have three very well prepared TPC Racing Porsches out here with us this week. Rob Lorndale and Jordan Wallace were here during the non-points event and did very well, but we learned a lot on the car setups during that event. We did a test with Pedro just before that and he’s done very well in the early practice sessions. I think we’re in a really good spot for the weekend. The goal for the event is to capitalize on as much as we can. Rob currently sits P3 in the points and it’s just really important for him to have a nice clean race and finish off the year on a high note and to take the cars home just the way they came off the trailers. I can’t thank the TPC Racing team enough, between all the different series that we race in we weren’t even home for a full 24 hours before coming here. It was a really tough turnaround the guys are really tired so I’m super proud of the effort they’ve put in.”

Rob Lorndale, Driver, No. 6 Porsche 911 GT3 Cup: “It’s a real privilege to be able to come back here to Indy. I really like the road course here. We’ve had some practice and I feel as if I picked up where I left off a month ago. Pedro and I are working with Spencer Pumpelly to try to refine what we’re doing and get ready for the first race on Friday. It seems quite similar grip wise, but we’re anticipating some weather will come in and we’ll be doing some driving in the rain on Friday. We’ll deal with what we need to.”

Pedro Torres, Driver, No. 16 Porsche 911 GT3 Cup: “The car feels great. I’m excited. This is actually a lot bigger than I thought it was going to be. I thought the track would be shorter but it’s quite long. The facility is amazing. It’s amazing that we’re here and able to enjoy it. I was surprised to see it’s in this good of condition. I was surprised that the asphalt on the oval is so different than the asphalt anywhere else. You can see all the grooves. It’s rough on the tires.”