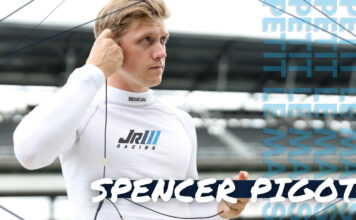 Pigot brings 17 years of open-wheel and sports car experience to the team. The young American has won two open wheel championships in the Road to Indy program on his way to 58 NTT IndyCar Series starts.

Beyond his open-wheel success, Pigot has dominated in the LMP3 platform winning the 2021 Rolex 24 Hours at Daytona and following up with a podium result at Sebring International Raceway. The podium at Michelin Raceway Road Atlanta is familiar for Pigot who captured a third-place finish during the 2018 edition of the event in the DPi category.

“I am very excited to join Jr III Racing for Petit Le Mans,” said Pigot. “Billy (Glavin) operates the team at a level that gives me confidence in the preparation of the car and Ari (Balogh) and Garret (Grist) have welcomed me with open arms. We have had the opportunity to work together in preparation for the race weekend. We have what it takes to contend for a win and show what we are capable of together during Petit Le Mans.”