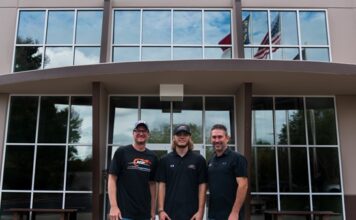 Kvapil learned of his new opportunity by surprise, as team owner Dale Earnhardt Jr. delivered the news Monday afternoon. “I thought I was coming here to JRM to sign some papers or something, and they surprised me by saying I was running the No. 8 next season,” he said.

“It’s really exciting,” said the younger Kvapil, fresh off his championship in the CARS Racing Tour’s Super Late Model division earlier this month. “I ran the Florence race for JRM, came out with a really good finish after leading 113 of the 125 laps and just came up a little short in the end. I’m really thankful for this opportunity. These kinds of chances don’t come up that often.

“I just need to be able to be consistent, try to stay out of the wrecks and contend for wins every week in the CARS Racing Tour’s Late Model Stock Car Series.”

On Oct. 16, Kvapil overcame an eight-point deficit to Matt Craig to win the CARS Tour’s Super Late Model crown with a win in the season finale at Virginia’s South Boston Speedway.

“The Late Model program is the foundation on which JR Motorsports was built,” said L.W. Miller, JRM’s director of motorsports. “It has always been very important to Dale, Kelley and myself. Josh won a lot of races and championships for us, and looking to the future, we see Carson as the kind of driver we can continue to build our program around.

“He knows how to race and win, and he has a bright future ahead of him. I can see him taking the same kind of path to the upper levels of NASCAR, just like Josh has done, and I’m very excited for his future and for the future of our Late Model program.”
Additional details on sponsorship and the 2022 schedule will be announced at a later date.

ABOUT JR MOTORSPORTS:
JR Motorsports is the racing operation co-owned by NASCAR Hall of Fame member and 15-time Most Popular Driver Dale Earnhardt Jr., Kelley Earnhardt Miller and NASCAR Hall of Famer Rick Hendrick. Now in its 20th year of overall competition, JR Motorsports competes in multiple divisions, including the NASCAR Xfinity Series where it currently fields four full-time teams and earned championships in 2014, 2017 and 2018. The company also races in Late Model competition and owns four championships in regional Late Model divisions and added a prized national title in 2020. To learn more about the organization, its drivers and its sponsorship opportunities, visit www.jrmracing.com.