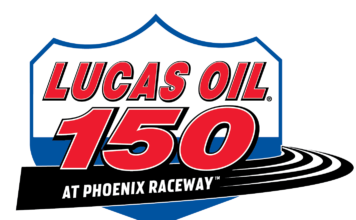 The other Kyle Busch Motorsports team in Victory Lane with Chandler Smith. Second win of the year for Chandler as well as Rookie of the Year. How was your race?

“Yeah, for sure, first and foremost, All Glory to the Man Upstairs, without him, none of this would be possible. I wouldn’t have all these awesome relationships with all these guys, my racing family. This is my family. Also, he’s blessed me with a great family and being around great people and being able to come out to Phoenix Raceway in front of these fans tonight and be able to compete in high tier equipment. I’m just really blessed right now. Can’t thank Safelite, Toyota Racing, Danny (Stockman), KBM, Kyle (Busch), everybody that goes down the line to make this happen.”

You see the emotion out of Ben Rhodes. Ben, you started the season with a win at Daytona and you finish the season winning the Championship at Phoenix. You sir are the Camping World Truck Series Champion.

“That was the hardest last 40 laps I think I have ever driven in my life. I was doing things to the race car I probably shouldn’t have been doing, it was dumb, but I had everything to lose. And we brought it home and won it. I don’t even know what to say. This is crazy. Bookends for the season, I am so proud of my ThorSport Racing group. This wasn’t like a vision we had, right, everyone wants to win it, but you just don’t know, it’s so hard. I just can’t thank Duke and Rhonda (Thorson) enough. They are the reason I’m here tonight, Bombardier, Toyota, Menards, WileyX, we have so many people that help us, I can’t even talk right now I’m so excited.“

It’s amazing John Hunter Nemecheck finished seventh given everything you went through tonight. I know you were short on the championship and that’s what mattered. Can you bring me through everything you had to battle out there tonight?

“Yeah, I got run in to the first corner, got in to the fence, somebody else ran in to us on the left side and this thing is killed pretty much, but had a left front tire go flat, went down two laps, got both of our laps back, but just needed more laps I guess. After all, felt we had the best truck tonight Playoff wise for sure. Drove from pretty much last to seventh there and running down Ben (Rhodes) and Zane (Smith) for the championship, just not enough. That’s what’s frustrating. A huge shout out to all of our partners. I’m disappointed, frustrated. Thank you Pye-Barker Fire Alarm Services, Toyota, Kyle (Busch), everyone. Thankful for the opportunity. We came here to win races this year, we succeeded, came up short of the championship. I’ll be #BackForMore next year.”

What were you fighting tonight?

“We really fought free off all night. Really free off, center off. Never really could get ahold of it for whatever reason. I’m excited for Ben (Rhodes), Duke and Rhonda (Thorson), everybody over there. This Menards Toyota Tundra – we qualified well, I mean, decent. I was really worried about that because every time we qualify decent here, we don’t race good. All-in-all, regroup, head to Daytona – go to 2022.”