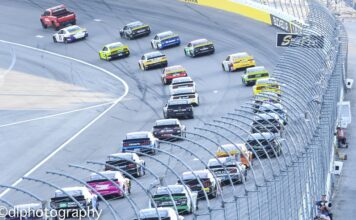 NASCAR 2022 series is officially here with us and there are major track changes throughout the season. This particular cup series is the 51st season for the modern era series and the 74th season for the United states NASCAR professional stock car race. This season marks the Next-Gen Car and it’s also the first series of the race to be covered by a US network. Below are the various tracks for the 2022 NASCAR race.

This popular Homestead Miami Speedway track is back for the 2022 NASCAR series. However, the track isn’t going to be used for the playoffs unlike before where it was used for the championship. To be specific from 2002 to 2019, this track hosted the title race weekend. Homestead Miami speedway race is before the Martinsville speedway elimination one.

This particular race with eventually remain the same which is the 10 race playoff four round. In other words, all three playoff elimination races are typically similar to those of the 2021 schedule. The sixteenth round ends at Bristol Motor Speedway, the twelfth round on Charlotte Motor Speedway’s Roval, and the final round at the Martinsville race. After that, we have the championships which are hosted at the Phoenix Raceway.

This particular race is popularly known as the World Wide Technology Raceway which will take place in June 2022. On the other hand, Pocono Raceway will only host one race in the entire 2022 NASCAR series. The Truck Series which was hosted on the Gateway Arch and the Xfinity Series back in 2010, is currently scheduled to host the premier Cup Series.

The Clash race which is a preseason exhibition race was initially held at Daytona International Speedway. However, for the 2022 NASCAR series, the race will be carried out in Los Angeles Memorial Coliseum 14 days prior to the Daytona 500 season-opening race. The new venue is indeed going to offer both spectators and drivers amazing views of South California. The Clash at the Coliseum will take place on Feb 6, 2022, and drives will use NextGen cars for the first time in this event.

The 2022 NASCAR series has only a week off throughout the entire season. To be specific, the break is bound to happen in mid-June. What this means is the race will be on Easter for the first time after a long time. Alternatively, as you wait for the season to resume you can always check out Helpbet, your leading online betting guide.

Although the 2021 NASCAR made some major changes in the race, many of the race schedules are typically the same in 2022. For instance, the Nashville Superspeedway, Circuit of The Americas, Road America and Indianapolis Motor Speedway, and the Bristol Motor Speedway’s dirt race are all part of the season lineup. However, the only difference is in the schedules. Unfortunately, there won’t be any action on the Daytona International Speedway’s road course unlike in the previous two NASCAR seasons.