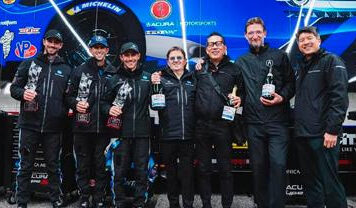 Ricky Taylor, Filipe Albuquerque and Alexander Rossi took the unique title, based on positions at various race distances in the four endurance classics on the IMSA WeatherTech SportsCar Championship: the Rolex 24 At Daytona, Mobil 1 Twelve Hours of Sebring, Sahlen’s Six Hours of Watkins Glen, and Petit Le Mans. Justice Brothers won Petit Le Mans with the Taylors in 2018 and 2020.

Taylor and Albuquerque also came within an eyelash of capturing the 2021 DPi championship in the No. 10 Konica Minolta Acura ASRX-05. Leading the standings since winning the season-opening Rolex 24, Taylor made a bold if unlikely pass across the grass to take the crucial second-place position entering the final turn at Road Atlanta. Action Express driver Felipe Nasr, however, was able to maintain momentum and regained the position – and the season championship – by 0.405-seconds at the checkered flag.

“This was the hardest weekend in recent memory,” Ricky Taylor said. “It was a trying weekend where we didn’t have pace until the race. I think the way the race was going and what we saw at the end was all the drivers doing our best to pay the guys back and earn what the team deserves. It’s an incredibly disappointing result, but we’re lucky to be able to fight like this.

“I think the positive is that we have the shortest offseason we’ve ever had this year, so we can go straight to Daytona and finish next season like we wanted to finish this one: one spot higher,” Taylor added.

Meyer Shank Racing was one of the cars to beat in DPi. Helio Castroneves – who captured his fourth Indianapolis 500 victory earlier this year with support from Justice Brothers – joined Juan Pablo Montoya and Dane Cameron in the No. 60 Acura ARX-05. The car was in contention for the victory until floor damage led to its retirement in the final hour.

The Sebring-winning No. 5 JDC-Miller Motorsports Cadillac DPi-V.R of Tristan Nunez, Loic Duval and Sebastien Bourdais led four times for 33 laps, and was in the hunt until dropping out with just over one hour remaining.

Performance Tech Motorsports’ No. 38 Rediscover My Life Ligier JSP320 of Dan Goldburg, Miathe Jakobsen and Rasmus Lindh paced practice and qualified second in the LMP3 category. The team led two laps, but was forced to retire with a mechanical failure with three hours and 30 minutes remaining.

Justice Brothers, Inc. is a manufacturer and worldwide distributor of over 100 car care products, fleet, farm, and industrial lubricants and cleaners. Since their beginnings in the additive industry, the Justice Brothers Corporation has been an innovator in the development of technically advanced products to solve problems in the automotive service industry. During their over 85 years in the automotive industry, Justice Brothers has built a large and loyal customer base that encompasses quick lubes, dealerships, and independent auto stores.

Justice Brothers will be looking for its fifth Rolex 24 victory with the Taylors since 2017 when the 2022 WeatherTech SportsCar Championship begins on Jan. 29-30.