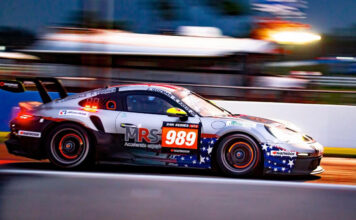 SEBRING, Florida (November 23, 2021) – TPC Racing’s successful history added a new chapter this past weekend at Sebring International Raceway, where the team and drivers Pedro Torres and Rob Lorndale returned to the world of endurance racing and left with plenty of positives, including laps led in the world-wide Hankook 24H Series.

The 2006 GT-class winners at the Rolex 24 At Daytona, TPC Racing’s most recent efforts have been in sprint-race competitions. The Sebring 24H was an opportunity to work with European Porsche-racing stalwart MRS GT-Racing and add TPC Racing drivers Torres and Lorndale to the endurance racing driver roster.

Though contact in Turn One ended the team’s run in a 992-generation Porsche 911 GT3 Cup just shy of the twelve-hour mark of the race, TPC Racing and both drivers were able to take away some positives from the event.

The No. 989 Porsche 911 GT3 Cup had led for nearly four hours prior to the contact that ended the night. Because the race began at 5 p.m. local time, most of that 11-hour run came at night around an already challenging Sebring International Raceway.

“What an incredible experience for all of us here at TPC Racing,” Harris Levitas, Director of Race Operations said. “TPC Racing hasn’t been endurance racing since our last year in what was then Grand-Am. We were in a Porsche then, so it was nice to make our return with the Porsche family and run well. We can’t thank MRS GT-Racing enough for their support and allowing us to be a part of their effort this weekend at Sebring.”

The event was the endurance racing debuts for Torres and Lorndale, who competed this season in the single-make Porsche Sprint Challenge North America championship.

“The endurance racing format was a brand-new challenge for Pedro and Rob, and they handled it better than could be expected,” Levitas said. “This was the first time they had driven at night with this type of competition, this was the first time they’d had to do driver changes, and really the first time either of them had to compromise a setup for a team situation. To help get this car to the lead and running strong before the incident is a credit to how much they’ve learned this season.”

The Hankook 24H race was the season-ender for both Torres and Lorndale after their rookie seasons of professional racing. Lorndale finished third in the Porsche Sprint Challenge North America Gold Cup standings, while Torres earned five podiums in the same class and, with Lorndale, boosted TPC Racing to a Team Championship.