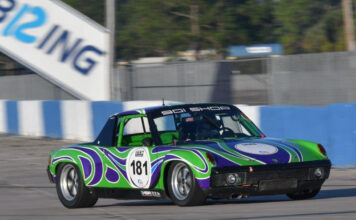 The undeniable star or the day was Todd Treffert who continued his recent reign over Sebring International Raceway with two feature race wins Thursday in his Speedconcepts 1974 No. 141 Porsche 911 IROC prepared by the 901 Shop.

Treffert scored the overall and GT Classic (GTC) victories in the B.R.M. Endurance Challenge race and backed it up less than an hour later with another flag-to-flag triumph in the HSR Classic RS Cup race.

Combined with the season-opening HSR Spring Fling, Treffert has amassed a run of six-straight overall B.R.M. Endurance Challenge victories at Sebring the last few years. His Classic RS Cup win today was also his third straight victory at the Sebring Historics in the all-Porsche class series for 1970’s era 911 RS/RSR and IROC models.

Yves Scemama finished second overall and in GTC in the B.R.M. race in his 1974 No. 52 Porsche 911 IROC while Damon DeSantis and David Hinton completed the overall and GTC podiums in the 1974 No. 82 Porsche 911 RSR. Both the Scemama and DeSantis Porsches are prepared by Heritage Motorsports.

The Vintage class victory went to the family team of Tom McGlynn and his son Jimmy McGlynn in their No. 181 Porsche 914/6 prepared by the 901 Shop.

The McGlynns crossed the finish line just behind the GTC top-three and joined the other Vintage podium finishers in securing overall finishing positions four through six in the 31-car field.

Travis Engen finished second in Vintage and rounded out the overall top five in his GMT Racing 1962 No. 1 Lotus 23B. John Deford completed the Vintage podium while also taking sixth overall in his 1970 No. 57 Porsche 914/6 prepared by the 901 Shop.

Thursday wrapped up with the season-ending Classic RS Cup race that saw Scooter Gabel and Mike Banz chase Treffert to the finish. Gabel finished second in the Alegra Motorsports 1973 No. 122 Porsche 911 while Banz came home third in his Heritage Motorsports 1974 No. 13 Porsche 911 RSR

Another Friday highlight is the arrival of vintage airplanes that will be landing all morning at nearby Sebring Regional Airport. The traditional “Parade of Planes” from the airport to the Sebring competitor paddock is scheduled for Friday at 4:30 p.m. EST.

Spectator tickets for the HSR Classic Sebring 12 Hour are available exclusively at Sebring International Raceway throughout the event. Learn more at www.HSRtickets.com.
About HSR: Historic Sportscar Racing (HSR) was formed in the mid-1970s with an event at Road Atlanta. There was one goal then and it remains true today: to celebrate the race cars from the past. As a “time machine” of sights and sounds, HSR provides a venue for competitors and spectators alike to share in the wonderful history and excitement created by the cars that competed at race tracks around the world. HSR currently sanctions eight vintage and historic racing events at some of the world’s most renowned race tracks, including Road Atlanta, Sebring International Raceway, Daytona International Speedway and more. The complete schedule and full event information can be found on HSR’s website at www.HSRRace.com. Look for the HSR Channel on YouTube and follow HSR on Facebook at www.Facebook.com/HSRrace/ and on Twitter and Instagram at @HSR_race. A dedicated website for the Classic 24 Hour at Daytona presented by IMSA is available at www.Classic24hour.com.