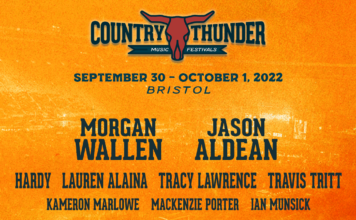 Country Thunder Bristol will double your pleasure and double your fun with an epic two-day extravaganza at historic Bristol Motor Speedway next Fall!

After October’s instant sell-out, expanding to a two-day affair was an obvious next step.

“The fans in Bristol, and indeed, the entire Tri-Cities area have spoken,” says Country Thunder Music Festivals CEO, Troy Vollhoffer. “We have made so many wonderful new friends in this part of the world that we can’t wait to get back.

“The camping culture is huge in so many Country Thunder markets, and I see it growing here now that we are a multi-day event. Add that to the history and electricity of Bristol Motor Speedway and you have one incredible event!”

An artist roster like this one will only add to the new growing legend in Bristol: Starting with the biggest musical entity in the world right now – and . . . he’s from Sneedville!

Every once in a while an artist comes along who transcends the country music genre and, in fact, changes the entire game. Morgan Wallen is that artist right now, for the immediate future, and well beyond.

The numbers and the fan hysteria speak for itself.

The blockbuster remained in the top 10 for 33 weeks, plus earned the biggest streaming week for a Country album in music history. It includes another record-breaking achievement with one of Time magazine’s Top 10 Songs of 2020, “7 Summers,” and “Wasted On You” – both debuted at #1 on the Billboard Hot Country Songs chart and inside the Billboard Hot 100’s Top 10, not to mention the 4x platinum Diplo collaboration, “Heartless,” and another platinum chart-topper, “More Than My Hometown.”

His limited Fall headlining gigs in the U.S. sold between 30 and 50,000 tickets per venue in minutes, causing pandemonium in each market. Wallen’s headline performance at Country Thunder Bristol has been called the “Country Music Event Of The Year” in America for 2021.

And how about Jason Aldean?

One of the most sought-after headliners in country music today, the Georgia native has amassed a staggering resume since releasing his self-titled debut in 2005.

Nine best-selling albums (including four No. 1s), 35 top-10 singles, including a staggering 20 No. 1s, every industry award imaginable (and, frankly, too many to list here), to go along with a brand-new two-part album set, Macon, Georgia.

Part one (Macon) came out on November 12 and yielded the No.2 smash, “If I Didn’t Love You” – a stunning duet with Carrie Underwood. Part-two (Georgia) will be released in April 2022.

Expect yet another batch of hits by the time Aldean hits the stage and electrifies Bristol Motor Speedway!

As if all that wasn’t enough, organizers also announced that red-hot HARDY, hit machine Lauren Alaina, veterans Travis Tritt & Tracy Lawrence, as well as Kameron Marlowe, MacKenzie Porter, Ian Munsick, and more yet-to-be-announced artists will be adding to the excitement!

Country Thunder Bristol 2022 is speeding your way – see you all next fall!

General Admission, Platinum Experience, Gold Circle, Camping and all the extras are available now. Visit countrythunder.com to purchase, or order by phone at 1-866-388-0007.

Official Release
Previous articleDriving Home for Christmas: What to Check Before You Set Off
Next articleVoyager Digital Extends Crypto-Based Partnership with NASCAR Driver Landon Cassill in Collaboration with Kaulig Racing