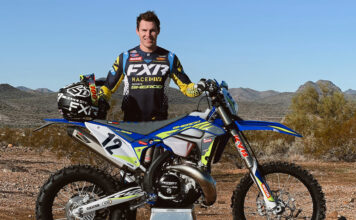 San Antonio, TX – FactoryONE Sherco announced today that Cooper Abbott has joined the team. The 23 year old Arizona native is a rising star in multiple disciplines of off-road racing. He most recently finished P2 in the 2021 AMA EnduroCross Championship, which is his best result of his young professional career.

“I am extremely excited to be joining the FactoryONE Sherco team alongside Cody Webb and the rest of the very talented team,” Said Abbott. “It’s always been a dream of mine to race for a factory team and I am ready to get the year going. I am super happy to be with a team that is striving for so much and has shown they can win races and championships. I’m thankful to Ron and everybody on the team for giving me this opportunity to go win races and championships on the best equipment the team has to give.”

Cooper will be racing the AMA Hard Enduro series as well as the AMA EnduroCross season. He will also be lining up against the worlds best in the FIM SuperEnduro World Championships in 2022, a first for him. Abbott has had great results in his short professional career including being the 2014 Amateur EnduroCross Champion. In 2019 he finished as the WORCS Sprint Enduro Pro 2 Champ. He has numerous EnduroCross podium finishes as a professional.

“We are super excited to be bringing in such a talented young rider in Cooper,” said FactoryONE Sherco’s President Ron Sallman. “His growth over the last few years is evident. He is coming off of a very strong EnduroCross season with a 2nd place in the championship. With that, our EX (EnduroCross) and SuperEnduro programs just received a huge shot in the arm. It is going to be awesome to watch Cooper and Cody lineup as teammates.”

About FactoryONE Sherco: FactoryONE Sherco is a multi-time United States AMA championship observed trials team and multi-discipline Championship enduro team led by some of the top riders in the business. The Trials team is led by 12x AMA Champion Pat Smage (Smah-gee) on the men’s side; and 6x AMA Champion Louise Forsley (fours-lee) on the Women’s side. The trials team consists of four professional riders and five development riders. The Enduro team is led By Cody Webb who is a multi-time champion that competes in Extreme Off-Road, EnduroCross and FIM SuperEnduro. He is also the 2010 AMA Mototrials Champion.

Things Buyers Need to Do Before Making a Car Purchase