No. 10 Konica Minolta Acura ARX-05 Readies to Chase History at the 60th Rolex 24 at DAYTONA 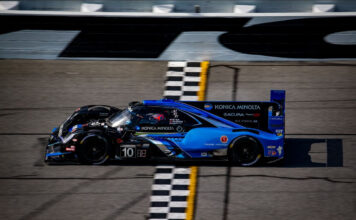 Brownsburg, Ind. (January 18, 2022) – Before the No. 10 Konica Minolta Acura ARX-05 team can chase a historic fourth consecutive Rolex 24 at DAYTONA victory, they must take to the banks of the Daytona International Speedway’s 3.6-mile road course at the 2022 Roar Before the Rolex 24. The Roar will be the first time that the returning trio of Ricky Taylor, Filipe Albuquerque and Alexander Rossi will be joined by veteran grand prix and endurance driver Will Stevens in race conditions.

With the largest field in recent memory, the annual test weekend will consist of four testing sessions and will conclude on Sunday, January 23rd with a 100-minute sprint race to determine the starting grid for the 60th Running of the Rolex 24 at DAYTONA. As the ever-important qualifying session for the Rolex 24, the Roar will serve as the first opportunity to earn points for the 2022 IMSA WeatherTech SportsCar Championship.

Six days later, on January 29-30, the green flag will drop at the iconic Rolex 24 at DAYTONA. A win for Wayne Taylor Racing would break the record for consecutive victories at the most prestigious endurance race on the continent, tie the record for overall victories, and mark the team’s fifth triumph in the last six years. Any advantage gained during the Roar weekend could prove vital in realizing this historic achievement.

Two-time winner of the Rolex 24 as a driver and five-time winner as a team owner, Wayne Taylor is keen to continue his unprecedented, career-long record of triumphs at the World Center of Racing. The South African native’s success has stretched across five decades as a race car driver and team owner and he is looking forward to the prospect of making history at this year’s 60th Running of the Rolex 24 at DAYTONA.

“We’re preparing to go to the Roar Before the 24,” commented Wayne Taylor. “It’s an all-new season with the same car, team and the same partners. We have Acura, HPD, Konica Minolta, Harrison Contracting and CIT back for the 2022 season. And we have one new driver, Will Stevens, who had a great test with us at Daytona in December. We’re expecting good things from him. It’s hard to speculate what is going to happen at the Roar because there are so many unknowns in terms of where everyone is going to stack up, so we’re just going into the race with open eyes and going to do what we normally do, which is to try to be the fastest car.”

After becoming the most prolific qualifier in IMSA history in 2021 and winning the Michelin Endurance Cup, veteran and two-time IMSA WeatherTech SportsCar Champion Ricky Taylor returns for a full-time season with extreme focus on achieving a third Rolex 24 at DAYTONA victory and a second in row.

“Preparation for the Roar this year has been normal,” said Taylor. “It’s been nice with such a short off season so we all still feel relatively fresh. The Roar will be super important just from a testing perspective. There’s a lot to learn still and, being a mini-race weekend, it tends to feel a bit more rushed. Alex and Filipe are an awesome and proven pairing. Will has been superb in his limited time in our No. 10 Konica Minolta Acura ARX-05 and we can’t wait to see what he can do in the coming weeks.”

2021 Michelin Endurance Cup Champion Filipe Albuquerque, who has won at Daytona in GT machinery once and twice in DPi, looks to achieve victory with WTR for the second consecutive year. The Portuguese driver is back for a second full-time season with the No. 10 Konica Minolta Acura ARX-05.

“We’re arriving at the beginning of the year which is always nice because we get new suits, new gloves, new helmets and the car is always in great shape,” mentioned Filipe Albuquerque. “The No. 10 Konica Minolta Acura ARX-05 team heads in as the reigning winners of the 2021 Rolex 24 at DAYTONA. We are much more prepared than last year, and the question is if we can repeat the win. We are pumped. We have a new teammate, Will Stevens, and the rest is the same which is great. The entire team and I have more experience with the car, so we are one of the candidates for the win. We need to take it step by step, since there are going to be 61 cars on the grid. That means a lot of yellow and eventually reds will happen, but it will be awesome as well because 24-hour races are always awesome.”

As a current McLaren Test and Reserve Driver, Will Stevens boast an extensive formula and endurance resume in Europe and will be making his IMSA WeatherTech SportsCar Championship debut during the Roar Before the 24 weekend. He’ll look to carry a strong result into his endurance driver role, as he is also running at the 2022 Mobil 1 Twelve Hours of Sebring and Motul Petit Le Mans for the team.

“Since our test back in December, which now feels like a long time ago, it’s been full focus on getting prepared for the Roar and the Rolex 24,” expressed Will Stevens. “It’s my first time there so I have been getting as prepared as I can not only physically but also in gathering as much information as I can to be fully ready. I know this race, this team and their partners have such a huge history here. We have only one goal and that’s to achieve even more success here, to get the season off to the best possible start and to get our hands on the Rolex. I can’t wait to have my first experience at this race and take in the atmosphere that I know Daytona brings. We are fully focused and ready for whatever comes our way!”

Driving for Acura and Honda (HPD), Alexander Rossi is a seven-time INDYCAR race winner, 2016 Indianapolis 500 champion, 2021 Baja 1000 Winner, 2021 Rolex 24 Champion and 2021 Endurance Cup Champion. The Roar and Rolex will be his first chance at another prestigious win with Wayne Taylor Racing in 2022.

“Excited to get back to Daytona,” commented Alexander Rossi. “And I know the whole team is fired up to defend the win from last year. Prep for the Rolex began after the finale last year, and of course, off-season training has been in high gear for the drivers. The Roar gets us back into a groove with the car and the crew. And Ricky, Filipe and I are really looking forward to getting Will more familiar with our Konica Minolta Acura rocket ship.”

The 2022 IMSA WeatherTech Sportscar Championship season officially begins on Friday, January 21st at Daytona International Speedway for the annual Roar Before the 24 with the first practice starting at 11:15 a.m. EST. Qualifying for the Qualifying Race for the WeatherTech Championship will begin on January 22nd at 4:15 p.m. EST. Green flag for the race will wave at 2:05 p.m. EST on Saturday, January 23rd with coverage on Peacock. Thursday, January 27th will mark the start of the Rolex 24 at DAYTONA weekend with a 1:40 pm EST start to the 24-hour battle on, January 29th.

Things Buyers Need to Do Before Making a Car Purchase