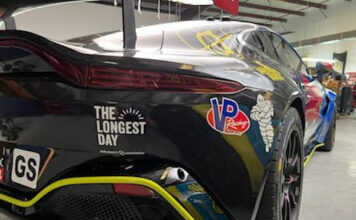 These numbers show the magnitude of Alzheimer’s Disease in the U.S., and two members of the Orlando-based Stoner Car Care Racing fielded by Automatic Racing team have made it their mission to raise awareness and funds to fight this dreaded disease.

To assist in their endeavor, the No. 09 Stoner Car Care Aston Martin Vantage GT4 driven by Rob Ecklin, Jr. and Ramin Abdolvahabi will carry a special decal this season to support the effort, beginning with next weekend’s BMW M Endurance Challenge, race one of the 2022 IMSA Michelin Pilot Challenge season and part of the legendary Rolex 24 At Daytona weekend for the IMSA WeatherTech SportsCar Championship. The local Alzheimer’s Association will also be on the race grid with special giveaways and information.

Bill Slupski, who works for the U.S. Department of Defense in Northern Florida also manages fuel for the Stoner Car Care Racing on IMSA race weekends. His son Alex works with Sunday Group Management, creating video content for Stoner Car Care. The Slupski family has firsthand knowledge of the affect that Alzheimer’s disease has on a family, and as they wondered how to make a difference, they chose racing as the “vehicle” for their program’s platform. They formed the End Alzheimer’s Racing team as a way to raise funds for the Alzheimer’s Association, competing in karting events around Florida.

“The key to us is to showcase the Stoner Car Care Racing fielded by Automatic Racing program as a way to raise awareness about both the Alzheimer’s Association and the End Alzheimer’s Racing team,” said Slupski, a native of Jacksonville, Fla. “Our program began as part of the Association’s ‘The Longest Day’ effort, which encourages people to use their favorite hobby or activity to raise money for Alzheimer’s on the longest day of the year, which is June 21. But for End Alzheimer’s Racing, it’s a year-round effort.

“Huge thanks to Stoner Car Care and Automatic Racing for allowing us to utilize the platform of IMSA sports car racing to spread word about the Association and the Longest Day program,” Slupski continued. “Being involved with the Rolex 24 At Daytona weekend puts us in front of thousands of people. Raising awareness about this disease as well as raising funds is extremely important to us.”

Slupski works closely with Carly Wille, Senior Development Manager of The Longest Day program at the Central & North Florida Chapter of the Alzheimer’s Association. Wille looks forward to the opportunity to bring awareness to the Rolex 24 weekend.

“As the prevalence of Alzheimer’s increases, it is of the utmost importance to us that we raise awareness and let those affected by Alzheimer’s and all other dementias know that they are not alone and that we are here to help,” said Wille. “The Longest Day initiative gives participants the opportunity to take any hobby or activity that they enjoy and turn it into a fundraiser. I have to say that the #EndAlzRacing team is one of our more extreme TLD events and it has been such a blast to work with them for the past few years. My hope is that they may inspire other racers or fans to take part in The Longest Day in the future.

“There are roughly 8,000 people living with Alzheimer’s disease in Volusia county alone,” Wille continued. “So in just the small area surrounding the Speedway there are so many affected by this disease. My hope is that attendees and race fans will see our logo or hear about the #EndAlzRacing team’s efforts and either support by donating to their Longest Day team or strike up a conversation about the cause.”

“We’re glad to support Bill and Alex and the End Alzheimer’s Racing team,” said Ecklin. “Alzheimer’s impacts so many families in this country – it’s been in my family as well. We’ve all been touched by it so it’s great to be able to support the effort. We’ve done some work with our local organizations in Pennsylvania, but we know how many fans will be at Daytona so the chance to make it more personal makes this a win for everyone.”

“This is such a great cause, so I really love this alignment,” said Russell. “It’s an absolute privilege to be a part of this alliance, between Bill, Rob, and the Alzheimer’s Association. The fan grid walk at Daytona is one of the most packed events of the year so to be able to get this message to all those fans is outstanding.

Part of the IMSA WeatherTech SportsCar Championship’s Rolex 24 at Daytona, the BMW M Endurance Challenge takes the green flag Friday, January 22 at 1:35 p.m. Eastern. The race will be live streamed in the U.S. on Peacock TV, while international viewers can watch via IMSA.tv. IMSA Radio will also be available at IMSA.com.