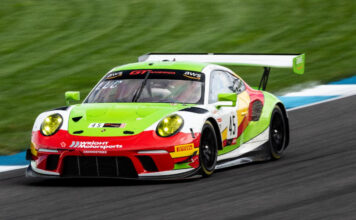 BATAVIA, OHIO, (March 30, 2022) – After clinching the team and driver championship titles for two consecutive years in the Fanatec GT World Challenge America powered by AWS, Wright Motorsports has announced their return to the series for the 2022 season. The veteran Porsche customer team will field a new lineup as Charlie Luck and Jan Heylen come together to race the No. 45 Porsche 911 GT3 R in the Pro/Am class.

Both drivers won their respective championships last season, with Charlie Luck and Wright Motorsports dominating the inaugural season of the GT America series with thirteen pole positions, nine wins, and an additional four podium finishes. The team’s success continued in the Pro/Am class with drivers Jan Heylen and Fred Poordad, who secured the championship titles with eleven podiums and three wins. Wright Motorsports also swept the team categories in the respective championships, closing out the season with five titles to add to the team’s illustrious sportscar racing history.

Though this will be the first time the pair share a car for a full-season program, Luck and Heylen have a longstanding relationship, going back to Luck’s days in the Porsche GT3 Cup Challenge USA with Heylen as his coach. For the last five years, Heylen has acted as Luck’s coach helping guide his progress through the ranks to race and capture the overall title in the GT America championship. The two also became more than just racing family over the fall, following Heylen’s marriage to Luck’s daughter, Margaret.

This year, Luck will depart from the single-driver, forty-minute race format of GT America to compete in GT World Challenge America. The top level of SRO America, this series features two drivers sharing a car over the course of a 90-minute race, with one mandatory full-service pit stop during the event. Luck and Heylen will compete in the Pro/Am class, defending Wright’s 2021 team and driver championship titles.

The 2022 calendar will follow a similar schedule to the previous season, hosting seven events starting at Sonoma Raceway in April and concluding at Indianapolis Motor Speedway in October. In its first full season of operation, Ozarks International Raceway will be a new addition to the GT World Challenge America series, bringing competitors to Gravois Mills, Missouri. Six of the seven 2022 events will hold two races per weekend, with the Indianapolis 8 Hour finale running as part of the Intercontinental GT Challenge.

Wright Motorsports will unload for the opening weekend at Sonoma Raceway on Wednesday, April 13 before test sessions get underway the following day. On Friday, April 15, the first official practice sessions of the weekend begin, allowing drivers and teams to make final preparations before the back-to-back race days.

Fans who hope to attend the event can purchase a weekend pass for just $40.00, while children under 12 years old are admitted for free. Race One will begin on Saturday, April 16 at 2:15 PM PT, with Race Two taking place the following day at 1:45 PM PT. Fans unable to attend the event can stream the races live for free at YouTube.com/GTWorld. For more information, visit wrightmotorsports.com.

Charlie Luck
﻿I’m really looking forward to my first time doing some driver changes and having everything that’s involved with the strategy of tires and fuel, and race strategy be a part of this upcoming year for me. I’m also very excited about working with Jan who has been coaching me for five years, so I’ll learn a ton under his guidance and direction. I know that Wright Motorsports will provide us with a competitive car. I’m super excited about the season.

Jan Heylen
It’s exciting to start the season as former champions, and it puts some healthy pressure on the team, and everyone involved, going into the same championship again as a favorite contender. On top of that, I don’t think there have been that many father and son-in-law driver combinations out there. That will certainly make it an extra special experience. We’re all looking forward to it and having the special time with each other and the family, and hopefully, make some good memories. Charlie is always super-motivated and has been training throughout the winter, to be in the best shape he can be and show up as well prepared as he can for the first race. He always shows up the best he can, and it makes a big difference to have a teammate who puts his heart into it. It’s nice to be a co-driver with someone as motivated as Charlie. It’s very encouraging for the team. I’m looking forward to our first race. It’s been a busy off-season for us. It seems like the last race of SRO America event was forever ago. I’m certainly ready for the first race to come around and hopefully, we can kick off the season with a good result and with the championship in mind.