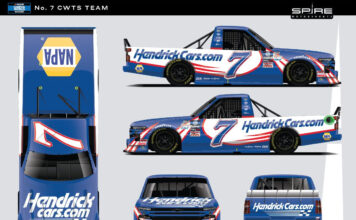 The Pinty’s Truck Race on Dirt will mark Elliott’s first NCWTS start of 2022. His most recent came last June at Texas Motor Speedway where he started 22nd, led 45 laps and brought home a runner-up finish.

HendrickCars.com will serve as the effort’s primary sponsor while NAPA AUTO PARTS, Elliott’s NCS majority partner, will be prominently displayed as an associate sponsor on the machine’s decklid and lower-rear quarter panels.

The event will mark the second consecutive season NASCAR and Bristol Motor Speedway have collaborated to transform the legendary half-mile Tennessee oval from pavement to dirt, creating one of the most talked about racing experiences on the 2022 calendar for the drivers, teams and fans.

“Driving the No. 7 Chevy Silverado at Bristol this weekend is definitely something I’m looking forward to,” said Elliott. “These trucks always look like a lot of fun to race on dirt, and this team has had some great runs this year and put together a solid program in a short amount of time. I’m excited to see what we can go out there and do on Saturday night.”

Elliott, 26, is the full-time driver of the No. 9 Chevrolet Camaro ZL1 for Hendrick Motorsports in the NCS and an eight-year veteran of NASCAR’s premier series with 229 starts on his résumé.

In eight NCS races this season, Elliott has notched one pole, one top five, five top 10s and currently leads the NCS championship points. Despite being a veteran of 229 NCS starts, Saturday’s 150-lap NCWTS showcase will mark just his 17th race at the controls of a Truck Series entry.

“The opportunity to have a talent the caliber of Chase Elliott, a NASCAR Cup Series champion, drive for Spire Motorsports at Bristol Motor Speedway, is an incredible opportunity for our NASCAR Camping World Truck Series team,” explained Spire Motorsports co-owner Jeff Dickerson. “Chase is a generational talent and someone who can win anytime he gets behind the wheel of a race car. He’s won at every level of the sport and we’re exceptionally fortunate and appreciative that he’s agreed to drive our truck.”

Elliott’s Hendrick Motorsports’ teammate William Byron handled the driving chores for Spire Motorsports in last Thursday’s Blue-Emu Maximum Pain Relief 200 at Martinsville Speedway. After starting deep in the field, Byron made a steady climb up the leaderboard throughout the evening and earned a dominating victory. The win was the first NCWTS win for Spire Motorsports in just its third race in the division.

The Pinty’s Truck Race on Dirt from Bristol Motor Speedway will be televised live on FS1 Saturday, April 16 beginning at 8 p.m. Eastern Daylight Time. The race will be broadcast live on the Motor Racing Network and SiriusXM NASCAR Radio Channel 90.

About Spire Motorsports …
Spire Motorsports was established in 2018 and is co-owned by Jeff Dickerson and Thaddeus “T.J.” Puchyr. In 2022, Spire Motorsports will field two full-time NASCAR Cup Series entries. Corey LaJoie will drive the team’s No. 7 Chevrolet Camaro ZL1 in NASCAR’s premier series for the entire 2022 campaign while Josh Bilicki and Landon Cassill will split time in the team’s No. 77 entry. The team will also field a NASCAR Camping World Truck Series team in select events.

Spire Motorsports earned an upset victory for the ages in its first full season of competition when Justin Haley took the checkered flag in the Coke Zero Sugar 400 at Daytona International Speedway on July 7, 2019.