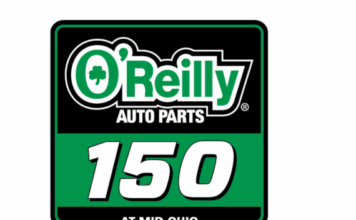 In addition to the name entitlement rights to the NASCAR weekend, O’Reilly will also be a season-long sponsor of Mid-Ohio Sports Car Course. With locations in 47 U.S. states, including 217 stores in Ohio, O’Reilly Automotive, Inc. is one of the largest specialty retailers of automotive parts, tools, supplies and equipment and accessories in the U.S.

“Our entire team at O’Reilly Auto Parts is excited to be a part of this event as the NASCAR Camping World Truck Series makes its debut at Mid-Ohio Sports Car Course,” said Hugo Sanchez, O’Reilly Auto Parts Vice President of Marketing and Advertising. “We also look forward to having a presence throughout the season in front of the track’s great fans. It’s going to be an action-packed season highlighted by the O’Reilly Auto Parts 150 at Mid-Ohio.”

Through this new association with Mid-Ohio Sports Car Course, O’Reilly will receive significant trackside signage which will be utilized to showcase its Super Start Battery brand, other onsite branding and display activations at each of the five major spectator events at the facility. O’Reilly will also have access to tickets, hospitality and VIP experiences across the 2022 Mid-Ohio Sports Car Course racing season.

“It’s going to be a special moment to see the NASCAR Camping World Truck Series take its first laps around the track during the O’Reilly Auto Parts 150 at Mid-Ohio weekend,” said Mid-Ohio Sports Car Course President Craig Rust. “We thank O’Reilly for helping us bring this incredible new event to our fans at Mid-Ohio and welcome them to our family of partners.”

Tickets are on sale now for the O’Reilly Auto Parts 150 at Mid-Ohio. A Weekend General Admission ticket is $60 which includes access to the grandstands for both Friday and Saturday. Single Day tickets are also available for $50 per day. Tickets purchased at the gate cost an additional $10. Children 12 and under receive free general admission to all events at Mid-Ohio Sports Car Course when accompanied by a ticketed adult. Mid-Ohio Season Race Passes are still on sale through the first spectator event. It provides the best access and most value to attend all five major race weekends, plus access to additional race events not open to the general public.

Visit midohio.com or call 419-884-4000, 8:30 a.m.-5 p.m. ET, Monday to Friday to purchase tickets or for more information. Follow the O’Reilly Auto Parts 150 at Mid-Ohio on social media with #TrucksMO.
About O’Reilly Auto Parts:
O’Reilly Automotive, Inc. was founded in 1957 by the O’Reilly family and is one of the largest specialty retailers of automotive aftermarket parts, tools, supplies, equipment and accessories in the United States, serving both the do-it-yourself and professional service provider markets. Visit the Company’s website at www.OReillyAuto.com for additional information about O’Reilly, including access to online shopping and current promotions, store locations, hours and services, employment opportunities and other programs. As of March 31, 2022, the Company operated 5,811 stores in 47 U.S. states and 27 stores in Mexico.