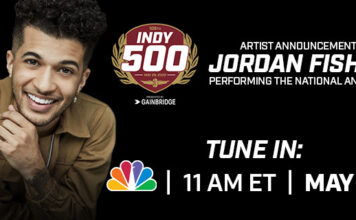 INDIANAPOLIS (Thursday, May 19, 2022) – Jordan Fisher, whose accomplishments and accolades span from television to music, Broadway and film, will perform the national anthem before the start of the 106th Running of the Indianapolis 500 presented by Gainbridge on Sunday, May 29 at Indianapolis Motor Speedway.

Fisher is an actor, producer and musician. He was the first African American to portray the title character of Evan in Broadway’s “Dear Evan Hansen” and Mark in Fox’s Emmy-nominated “Rent Live.” Named a breakout star in Fox’s Emmy-winning broadcast “Grease Live!”, Fisher also starred in Netflix’s “To All the Boys I’ve Loved Before” and “Work It,” and the CW’s “The Flash.”

In addition to a duet collaboration with Lin-Manuel Miranda on Disney’s “Moana” soundtrack, Fisher joined the cast of the Tony Award-winning musical “Hamilton.” He also won ABC’s 25th season of “Dancing with the Stars” with his partner Lindsay Arnold in 2017. He subsequently hosted “Dancing with the Stars: Juniors” in 2018.

“The national anthem is a signature pre-race moment, and Jordan is ready to welcome fans back to Indianapolis Motor Speedway with a memorable and emotional performance at the Racing Capital of the World,” IMS President J. Douglas Boles said. “This year’s pre-race show will be fantastic, and I know our fans at the track and everyone watching on NBC will be thrilled with the excitement, tradition and pageantry on display as we await the green flag.”

Beyond his accomplishments as a performer, Fisher is an advocate for youth in foster care, continually partnering with nonprofits. He started “Be My Friend” to support dependable communities that build up those in need. Fisher is also an avid gamer who regularly streams on Twitch (@jordanfisher).

NBC’s live coverage of the Indianapolis 500 presented by Gainbridge starts at 11 a.m. (ET) Sunday, May 29.

Visit ims.com to purchase tickets for the 106th Indianapolis 500 presented by Gainbridge on Sunday, May 29 and for more information on the complete Month of May schedule at IMS.