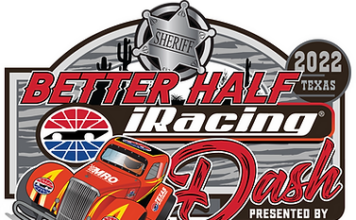 CONCORD, N.C. – (May 20, 2022) – When the checkered flag flew over the 2022 Better Half iRacing Dash, driver McCall Gaulding backed up last year’s victory by once again claiming the championship, trophy and ring from Southern Recognition, along with a $10,000 purse for her charity, Feeding America. The annual fundraising event benefiting Motor Racing Outreach continues to be a great, fun and growing success.

Airing on FS1’s NASCAR “Race Hub” from the FOX Sports Studios, the 12 drivers received coaching from their NASCAR-affiliated crew chiefs as they competed via iRacing in US Legends cars at virtual Texas Motor Speedway. iRacing is the most realistic racing simulation game and the official simulation of NASCAR. Two drivers earned front row starting positions based off of what they fundraised leading up to the race. One was Jamie Lambert, wife of NASCAR Xfinity Series crew chief Luke Lambert. Her crew chief was Lambert’s driver Noah Gragson. The other was Taylor Nemechek, wife of NASCAR Camping World Truck Series driver John Hunter Nemechek, who had ARCA driver Corey Heim serving as her crew chief.

Leading up to the race were two heats. Gaulding, who had NASCAR Camping World Truck Series driver and fiance Zane Smith as her crew chief, won the first one. Kenzie Hemric, wife of defending NASCAR Xfinity Series Championship driver Daniel Hemric, won the second heat with her husband as crew chief.

When the initial green flag waved, the battles were intense in the first few laps. Gaulding quickly worked her way into the top spot and never relinquished the lead. As the final laps ticked down, Kennedy Gaulding and Nemechek became embroiled in a battle for second.

On the final lap, Gaulding prevailed to finish second to her sister, with Nemechek taking third. Close behind was Lambert in fourth, with Kate Fegley-Lummus rounding out the top-five finishers. The rest of the field, in order, were Jennifer Self, Kendall McReynolds-Anderson, Kristin Labonte, Jessica Ives, Jacquelyn Ragan, Cami Creed and Kenzie Hemric.

Afterward, McCall Gaulding said she was quite happy to partake in this year’s Better Half iRacing Dash to raise money for MRO, win for her charity, and best of all – defend her title as champion.

“Winning back-to-back is pretty dang cool,” Gaulding said. “I’m so pumped to have won again, not only for myself, but for my sponsor KOIA and my charity Feeding America. Plus, winning that huge trophy and the beautiful ring from Southern Recognition. It was so much fun being part of the Better Half iRacing Dash once again this year and competing against these wonderful ladies in our sport. It’s also super cool my little sister finished second, making it a Gaulding Girls sweep.”

“A big thank you to KOIA for coming on board to sponsor me, to MRO for putting this race on once again for us better halves, and for all they do for the sport of NASCAR. My crew chief, Zane Smith, is proud of me, and said I was one of the easiest drivers to work with. We had so much fun working together as he taught me all the racing terms. Finally, a huge thank you to everyone who donated to help me and benefit MRO.”

MRO has hosted the event since its inception 12 years ago, with Kristin Labonte coming on board through her company, Breaking Limits, to organize and promote the event.

“What a race! The 2022 Better Half iRacing Dash exceeded expectations in every way,” said Billy Mauldin, Executive Director for MRO. “Under the leadership of Kristin Labonte, ‘The Commish,’ this year’s group of drivers not only put on a show, but they raised a lot of money for MRO. I cannot thank FOX, iRacing, US Legends and NASCAR enough for all their support. The buzz for 2023 has already started, as many drivers are looking forward to getting back behind the wheel in an effort to unseat our two-time, defending champion, McCall Gaulding. The Better Halves proved themselves as such once again.”