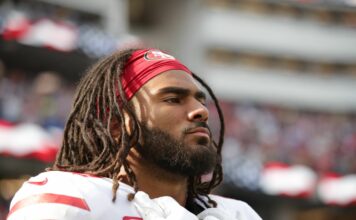 SONOMA, Calif. (June 7, 2022) – Fred Warner, the San Fransisco 49ers’ All-Pro 49er linebacker is used to taking on opposing ballcarriers. But this Sunday, he will tackle the 10-turn Sonoma Raceway road course as the honorary pace car driver for the Toyota/Save Mart 350. Warner will pilot the Official Toyota Camry pace car, which will be leading the 40-car field to the green flag at 1 p.m.

“I can’t wait to do this,” Warner said. “I’ve always enjoyed NASCAR and to get the opportunity to lead the field around an awesome raceway like Sonoma is going to be one of the highlights of my life.”

Warner, a California native who grew up in San Marcos, began working on his dream of playing football when he was seven years old. The sense of community he found in the sport not only made him love football but it taught him to learn the value of hard work throughout his early years in football.

Taking what he learned so early into his career landed him a spot at Brigham Young University (BYU). At BYU, Warner was a three-year starter and registered 264 total tackles, 32 tackles for loss, 6.5 sacks, seven interceptions (returning two for touchdowns), five fumble recoveries, three forced fumbles, and 13 pass breakups. His seven career interceptions rank second in school history among linebackers.

His hard work wasn’t over just yet, in January 2018 he participated in the NFL Scouting Combine and did all the tests for the selection. Warner displayed his skills and techniques in the pre-draft visits. He had private workouts with teams like the San Francisco 49ers, Denver Broncos, and Buffalo Bills but in April 2018 he was drafted by the San Francisco 49ers and was picked 70th overall in the third round by the 49ers where he signed a four-year contract for $3.97 million with a signing bonus of $1.01 million.

Warner’s NFL debut showcased why he would be a force to be reckoned with when he had a recorded 12 combined tackles (11 solo tackles), one pass defended, and one forced fumble just in his first year with the team, the years that followed weren’t much of a surprise when he kept breaking records and showing why his ranking of 17th on NFL’s top 25 players 25 and under was deserving.

Warner will be recognized during the pre-race show, prior to hitting the track. For tickets or more information on the Toyota/Save Mart 350, visit www.sonomaraceway.com/events/toyota-save-mart-350/tickets/ or call 800-870-RACE. Weekend and single-day tickets are available; race-day tickets for kids 12 and under are just $10 and free on Friday and Saturday with the advance purchase of an adult ticket.